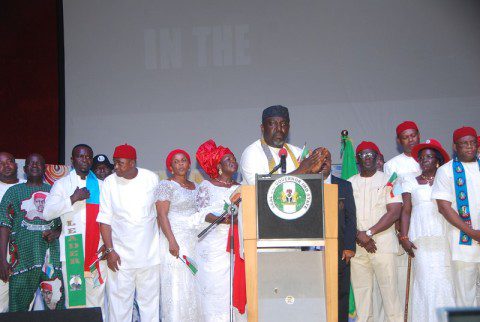 The media had extensively reported that the Governor of Imo State, Owelle Rochas Okorocha was under impeachment threat by the lawmakers in Imo State. One of the newspapers also reported that the lawmakers came up with the impeachment move against the governor over unpaid entitlements.
As a government, our sincere reaction is that we are not aware of such move. We read it in the newspapers like every other Nigerian. We are not aware that members of the State House of Assembly are making any move to impeach the governor of the State.
To say the least, the speculation has been on in some quarters and with the type of government in the state, we do not act on rumours. We are only responding now because the media had come up with the same claim.
The lawmakers in Imo have been so wonderful and have been working hand-in-glove with the state governor in achieving the massive transformation that has taken place in the state, inspite of their political affiliations.
And we do not see any reason to begin to see things differently or for us to begin to doubt the existing conviviality between them and the governor. Imo people have benefitted much from the cooperation existing between the Executive and the legislature in the State and would wish it to continue.
Again, to us, the impeachment move remains speculation that is neither here nor there especially when the governor in question has written his name in gold following the monumental achievements his administration has recorded in the state in less than four years.
The Assembly members in Imo State are all honourable men who would not like to be associated with the impeachment of a popular and people-oriented governor with high record of achievements. To us, the impeachment story is vague.
On the issue of unpaid entitlements, the members and the governor function as family members and they could also resolve such issue if it exists. The issue of entitlements of lawmakers anywhere in the world is a recurring issue. It does not end. If there is anything like that one does not feel that it is enough for people to begin to insinuate impeachment.
Even the PDP in the State that has shown much desperation to come back to power would not even contemplate asking their members to settle for impeachment against Governor Okorocha because they know it would be the most unpopular action in the history of the State and it must fail.
To us, the impeachment story is a moonlight tale like that of tortoise and his wife.
Imo is in the hand of God.
Sam Onwuemeodo
SSA, Media to
The Executive Governor
Send your news stories to newsghana101@gmail.com and via WhatsApp on +233 244244807 Follow News Ghana on Google News

Agnes Love Foundation Puts Smiles On the faces of widows