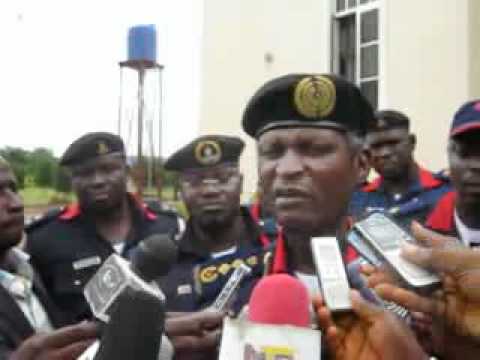 The attention of Anambra state command of NSCDC has been drawn to a false report by one Nweke Nweke published in RADIO BIAFRA Newspaper and 247ureports on the above subject matter.

It is not in the character of NSCDC to react to daily intentional false statements and claims especially from the likes of Nweke Nweke, but however, wishes to state on these particular false claims as follows:

That Nweke?s claim that Mr Michael Ochogwu the out gone State commandant allegedly embezzled undisclosed millions of naira  dished out by  the Immediate Past Governor of Anambra State Mr. Peter Obi for NSCDC officers serving in Government house as Completely false and Unfounded.That Nweke?s claim that Mr Michael Ochogwu resigned as a classroom teacher in Benue State and joined NSCDC in 2010 is a mere sophistry and frivolous . Let it be on record that the said commandant has served NSCDC in various capacities and in number of states since 2005.On the allegation that the out gone commandant and a female superintendent of the corps allegedly forged names for the purpose of obtaining the so called compensation of the out gone Governor of Anambra State is false and unreasonable.On the allegation that the out gone commandant was transferred to another command based on the so called unverified report of Nweke is false and unfounded. Be informed that management of NSCDC effected a change of commandants in almost sixteen states throughout the federation which is a normal routine, since the only thing constant in life and in public service is change.Members of the public are advised to ignore and disregard the false claims and misleading report promoted by Nweke Nweke who we doubt is a registered member of Nigeria Union of journalist, since he could not verify His report before publishing, already investigation is on-going and the so called Nweke Nweke has been Declared wanted BY the Authorities Of NSCDC Anambra State command.We wish to state our resolve to working with the Anambra State Government in the area of providing and securing lives and properties irrespective of the Evil intentions of the likes of Nweke Nweke to stain the existing cordial relationship between NSCDC and  Anambra State Government.