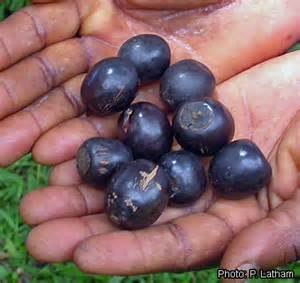 The best way to communicate is to say or write information in a manner that enables the listener or reader to decode the message in only one possible way. Writing or speaking in ways that permit subjective interpretation leads to ambiguity. The extreme cases occur when some consumables especially fruits are misnamed and the misnomers appear to take over the place of the correct names. A good example is the popular black fruit which the Ga people call ?yoyi?. What do you call this fruit in English language? All the people I spoke to call it ?blackberry?. The origin of this wrong name?Generational error syndrome? remains mystifying and perplexing. The correct English name for the fruit is African velvet tamarind. We will use both the common and botanical names to establish the correctness of the aforementioned name. All the three words are important and together they make up the correct name. Dropping any of them will leave a name that refers to a different crop.

Let us start our analysis from the last name?tamarind. Tamarind is a completely different tree botanically called Tamarindus indica (the species name ?indica? reflects its falsely declared India origin). The tamarind fruit (see photo attached) contains a brown sticky pulp that tastes tartly sour and/or sweet. This sour and/or sweet taste is also found in the fruit which is misnamed blackberry. The similarity in taste accounts for the presence of the word ?tamarind? in the name ?African velvet tamarind?. In the Upper West Region of Ghana, the Waala people call tamarind ?puhee?. They use its pulp to make a drink called ?puhikuong? meaning ?tamarind water?. Anytime, you visit the Upper West Regional Capital, Wa, ask for this refreshing drink! We move to the next word, velvet. The velvet probably describes the fine powdery brown pulp surrounding the seed of African velvet tamarind (see the photo attached). Adding ?velvet? to tamarind, we get ?velvet tamarind?. The term ?velvet tamarind? is the common name referring to three different, but closely related trees. All these three trees bear fruits which contain the velvet pulp. These trees, however, can be distinguished in several ways but I will focus on their origin and botanical names. Botanically, they are Dialium cochinchinense (native to southeast Asia), Dialium indum (native to south and southeast Asia) and finally Dialium guineense (native to Africa).

To refer explicitly to that velvet tamarind which is indigenous to Ghana and to other African countries, we attach the toponymic adjective ?African?. Hence, the correct name of the fruit widely misnamed in Accra as ?blackberry? is African velvet tamarind. In its botanical name, Dialium guineense, the species name ?guineense? referring to Guinea confirms its African origin (compare another indigenous African crop called oil palm which is also botanically named Elaeis guineensis).

Using our limited knowledge in botany, we can further justify the weirdness of the term ?blackberry? when used to describe African velvet tamarind. Blackberry refers to a completely different and an unrelated fruit produced by several species of plants botanically termed Rubus spp. (Note that sp. is singular, but spp. is plural. Always insert full stops at the end of these abbreviations.) Blackberries are black in colour. Also, they are berries (fleshy fruits containing juicy pulp with many seeds embedded in the pulp, eg, tomato and orange). Blackberries are thus succulent fruits which are true berries. They are temperate crops too.

The misnaming extends to Northern Ghana where a completely different plant is also labelled blackberry. The tree and its fruits, known as ?haaraa? among the Waala/Dagaaba people of the Upper West Region, is correctly called West African blackplum (see photo attached). The African blackplum, botanically termed Vitex doniana, is a one-seeded spherical fruit which is green when immature, but turns completely black when ripe. When eaten, the fruit blackens the teeth temporarily because both the edible portion (mesocarp) and the seed are black. Also, the outermost soft skin is black. Maybe, our foreteachers again misnamed it because of its blackness.

On the other hand, African velvet tamarind; which is a leguminous plant just like tamarind, dawadawa tree, flamboyant and groundnut; produces a fruit botanically termed pod. Notice that before licking the tartly sour/sweet pulp surrounding the seed of African velvet tamarind, you must crack the pod by pressing on it. This cracking is similar to that done to groundnut pod when we want the seeds. In consequence, African velvet tamarind is a dry fruit, and not a berry. Therefore, it still remains mysterious as to how it got the word ?berry? as part of the wrong name. However, the black colour of the exocarp (outermost fruit wall) most probably misled our foreteachers to erroneously attach the term ?black? to the name. Hmm!

Again, using our common knowledge in English orthography, we notice that the term blackberry is different from the brand name, BlackBerry, given to mobile phones. First, the name ?blackberry? is a common noun whereas the brand name, BlackBerry, is a proper noun. Second, the words are compounded differently. Blackberry is a solid word in sentence case (only the first letter is capitalized at the beginning of a sentence or in titles), but BlackBerry is in CamelCase (a word in CamelCase contains capital letters in between smaller ones, eg, WordPad, SuperSport, iPhone and ProCredit).

Never hesitate in dropping a comment. So valuable are they that we spent time reading them. This document is part of the Generational Error Series. Appreciate it? Thank a teacher! Interested in a soft copy, reach me as shown below.