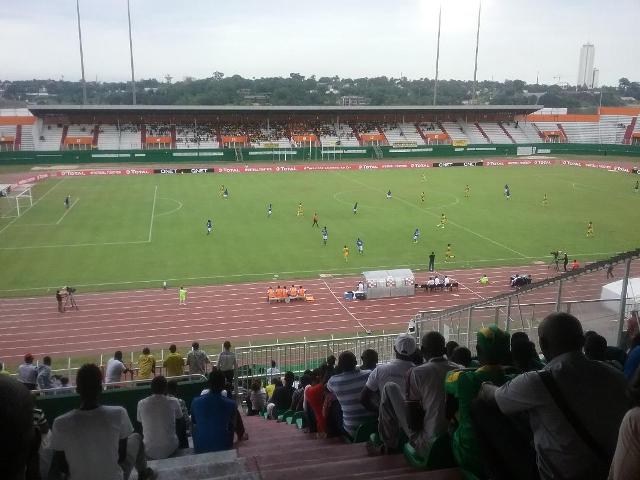 Aduana Stars, Ghana’s only representative in the Confederation of African Football(CAF) Confederations Cup, failed to break the jinx surrounding its winless form in away encounters in Africa as it begun the Confederation Cup campaigns once again losing by a goal to nil(0-1) against Asec Mimosa of Cote d’Ivoire in Abidjan.

It was Asec’s Amed Toure who headed home the only goal of the match in the 38th minute after a searching ball floated deep into its opponent’s goal territory, which found him completely unmarked.

Aduana had begun to lose concentration after giving such an impressive and remarkable start.

To the amazement of fans, they begun to slump down so fast giving off passes so easily, on many occasions to their opponents, while poor passes suddenly characterised their play after 30 minutes of play right to the tail end of the first half.

Over elaboration and untimely release of ball from Aduana’s midfielder Zakaria Mumuni to his team mates, at many instances led him to be denied or robbed off the ball by the Ivorians or losing it to the Ivorian players.

Both teams had given a very good account of themselves in the first 10 minutes of the game making dangerous incursions into each other’s goal territory but this yielded no results for the teams.

Yao Alphonse of Asec Mimosa came back very strongly at scoring again for Asec in the 24th minute but was completely robbed off the ball by Aduana’s defender Stephen Anonkye Badu.

But it was Asec who turned the heat on Aduana dominating the midfield with good inter-positional play and good play skills on the ball and initiation of deadly attacks led by Asec’s Agbeniadan Komlan and Yaw Kouame Alphonse against Aduana which continued to the end of the first half.

At this time, the Dormaa based side kept soaking pressure after pressure as the attacking front of Aduana Stars had completely broken down and failed to click to upset and pull offenses against the host side.

Aduana came back very strongly in the early stages of the second half and kept piling pressure on Asec with striker Nathaniel Asamoah spearheading attacks but his shots went way off target in the 44th minute as he attempted to heat the back of the net.

Aduana’s midfielder Elvis Opoku missed an opportunity to equalise in the 84th minute after dribbling past two defenders of Asec but his final delivery could hardly find the net.

Substitute Derrick Sasraku was unfortunately flagged offside in many attempts into spacious positions to fetch an equaliser in dying embers of the game.

2022 Edition Of Africa CEO Forum To Be Held In Abidjan

Hearts Of Oak, Aduana Stars Make It To Quarters Of MTN FA Cup