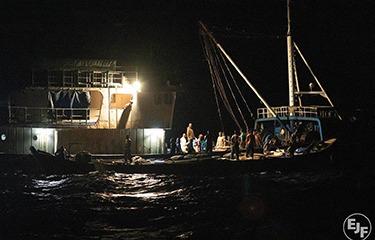 A Chinese industrial trawler which was fined one million dollars for using under-size mesh nets and taking fish below minimum landing size has been re-arrested for the same offence after failing to pay the fine.

The vessel, Lu Rong Yuan Yu 956, initially arrested in June 2019 for the said offence was issued with a fine of US$1 million by an out of court settlement committee, and an additional GHS 124,000 for the fish onboard the vessel in October 2019.

However, despite the owner’s refusal to pay the fine, the vessel licence was renewed, and the trawler put to sea again, fishing in the waters of both Ghana and neighbouring Cote d’Ivoire.

On Saturday, May 30, the Marine Police arrested the vessel again for the same offences of using nets with a mesh size below the legal limit and undersized fish.

The vessel is being detained until Tuesday, June 16, when the case would be due to for court.

But according to the Environmental Justice Foundation (EJF), an international Non-Governmental Organisation (NGO) working to protect the environment, such disregard for the law was enabled by lack of deterrent sanctions.

It also abhorred the decision by government officials in the full knowledge of such crimes to re-licence the vessel even when it had refused to pay the fine imposed.

“These repeat offences show that the system of sanctions in Ghana is not having a deterrent effect”, it said

Under international law, Ghana has a responsibility to establish and implement a system of deterrent sanctions that deprived offenders of the benefits flowing from their illegal fishing activities, it added

According to the EJF, the fact that the vessel was authorised by the Ghanaian authorities to fish in Cote d’Ivoire, despite its failure to pay a fine for serious illegal fishing offences, showed that Ghana’s decisions on such cases had international implications.

Mr Steve Trent, Executive Director of EJF told the Ghana News Agency (GNA) that it was vital to ensure that the vessel paid the full fines of both cases and that the outcome of this and other cases must be published on the Ministry’s website.

“Perpetrators cannot simply choose not to pay a fine and go back to the same criminal actions as before. That is not how justice works. To safeguard Ghana’s food security, livelihoods and stability, the government must act to tackle this issue across the whole fleet”, he stated.

He said the livelihoods and food security of millions of Ghanaians would be in danger if the government failed to crack down on such practices.

Labourer remanded into custody for robbery

Tailor gets 10 years imprisonment over fraud