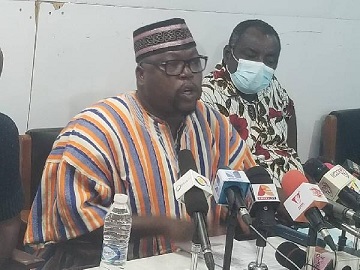 Mr Samson Awingobit Asaki, Executive Secretary of the Importers and Exporters Association of Ghana, has called on the government to reduce the cost of production for manufacturers to facilitate development.

According to him, the government must take a critical look at the operational cost of companies, especially the utility tariffs, to help manufacturers to deal with production costs, which is currently a big challenge rendering so many businesses unprofitable.

Mr Asaki was speaking with the Ghana News Agency in Tema after the Executive Members of the Importers and Exporters Association of Ghana paid a working visit to Dangote Cement in Tema.

The Association speaks and advocates for the country Importers and Exporters and aims to reach out to all and sundry who use the Port for clearance.

“These companies are charting full vessels of cargo with goods and they are paying so much to shipping lines, depot authorities, terminal operators hence if you are advocating for them you just do not always sit in your office to postulate that all is well.

“It is important to reach out to them to know their signs of progress and challenges and see how best you can get it resolved.”

Mr Asaki said for the economy to develop, the government must make a conscious effort to critically look at the manufacturing cost by providing them with good subsidies.

He said the subsidy would reflect on the prices of goods on the market, making them more affordable for consumers.

Mr Asaki said the price of cement had gone up because of the high cost of production and was likely to rise due to the price of fuel, which was having a direct effect on transportation.

He emphasized that the cement companies were faced with fundamental challenges such as the global increase in freight among others, which had prevented the companies from producing up to optimum.

Mr Asaki said production cost was a challenge and the government must look into it with immediate effect to save some companies from collapse.

The Executive Secretary explained that for manufacturing industries in Ghana to take advantage of the African Continental Free Trade Area (AfCFTA), there was the need to look at utility tariffs.
He, therefore, called on Mr Alan Kyerematen, the Minister of Trade and Industry, to tour some of the factories to be abreast with current happenings of what manufacturers were going through.

Let’s be decorous in our discussions relating to development – Ministers

People for Health pledges continuous partnership with communities for development