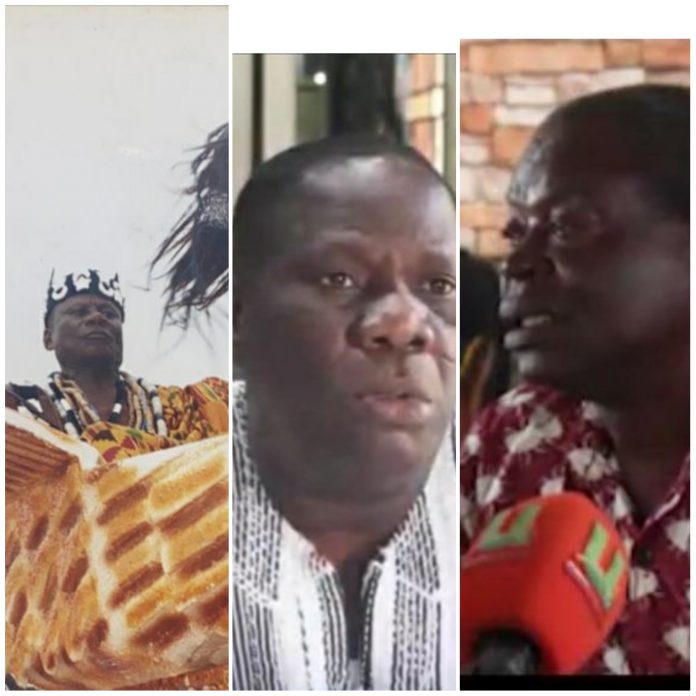 The destooled head of the Terkpebiawe clan in the Ada area, Emmanuel Tetteh Korle has been cautioned by the Kingmakers of the clan to immediately refrain from holding himself as the clan head in order not to incur their wrath.

According to him, most of the challenges facing the communities along the Songor with respect to brutalities, assault been meted out to the indigenes by the police could be attributed to his unscrupulous engagement with companies and individuals such as McDan whose interest is to deprive communities along the Songor lagoon basin and indegines in Ada their only means of survival on the pretext of providing development to the area.

“Where lies his allegiance and oaths sworn to the clan, the stool father installed you as custom and tradition demand and yet you felt the Songor belongs to you and so you can sell it without consulting the elders especially the stool father who installed you and the ‘Libi Wornor’ who is the custodian of the Songor lagoon. How can you sign an MOU and sell properties belonging to the clan without following due process. How can you sign an MOU with McDan telling him Songor belongs to you. Let me make it clear that he has been destooled as he cannot twist our arms and lease our properties to people for his selfish interest and think we are unintelligent people” he noted.

He said that several efforts made to get him to expunge his signature from some of these fraudulent and unscrupulous documents and provide reasons for his actions proved futile. This according to him does not augur well for the development of the clan and has since been destooled. ‘When we eventually met him to discuss some of these issues, not only was he disrespectful to the elders but he also went to the extent of invoking deities on us as king makers to die within three days if we went ahead to install anybody as the clan head ‘Wetsoyi’.

According to the stool father, though Emmanuel Tetteh Korle understands that the ‘Libi Wornor’ is an important pivot as far as the customs and traditions of the clan and Ada communities are concerned, he described that position as outmoded.

This according to him, ‘undermines and usurps the powers of the ‘Libi Wornor’ who was part of the key stakeholders in the installation of the destooled clan head.

The stool father stated that despite various advice offered him to refrain from these his dishonest ways, he remained unrepentant to the extent of granting some investors an opportunity to put up a mortuary close to the Songor lagoon, a situation they found will render the salt unhygienic for food preparation.

He added “he also misappropriated money presented to the clan by the planning committee for celebrating the Asafutufiami festival. This is highly unacceptable and we do not understand why he could do that as a clan head. Is he a priest? We need answers from him, if not, why does he arrogate himself the power of priesthood and pour libation”. he quizzed

The stool father maintained that after several deliberations on the matter and also considering the level of insubordination and his (the destooled Chief) continuous attempt to bring the name of the clan into disrepute especially disrespecting their authority as kingmakers, he was destooled as the clan head ‘Wetsoyi’.

He therefore appealed to the general public, especially investors who are interested in acquiring land from the clan for salt weaning or any other purpose to desist from engaging with Emmanuel Tetteh Korley (the destooled chief), ‘you do so at your own risk’ he warned.

In a related development, Nomo Tetteh Abledu Ayornu also appealed to the general public to again desist from dealing with one Seth Amonortey Narhguah purporting to be the stool father for the Terkpebiawe clan. ‘He should tell us his lineage to the Terkpebiawe clan, his grandparents and father’s lineage to the Terkpebiawe clan? In any case, how can the same person arrogate himself the position of a chief at Afiadenyigba, chairman of think tank, and stool father? These positions do not conform to the dictates of the Chieftaincy Act neither does it reflects the custom and tradition of our clan.

The stool father, Nomo Tetteh Abledu Ayornu further advised the general public to dissociate themselves from all these individuals with ‘ulterior motive determined to destroy the clan for their own parochial interest’.

He emphasized “We have one and only stool father for the Terkpebiawe clan which is Nomo Abledu Tetteh Ayornu with a stool empowered with the Authority to install a clan head ‘Wetsoyi’ for Terkpebiawe, the only one who has the authority to lease land in consultation with the elders to individuals and other entities. We have only one ‘Libi wornor’, who is Nomo Amate Apedo Ayornu working as royals and legitimately entrusted with these positions as tradition and custom demand.

The stool father however gave these individuals two weeks ultimatum to furnish them with datails of their lineage to the clan, their parents and grandparents and any other information that qualifies them to hold any of the aforementioned positions”