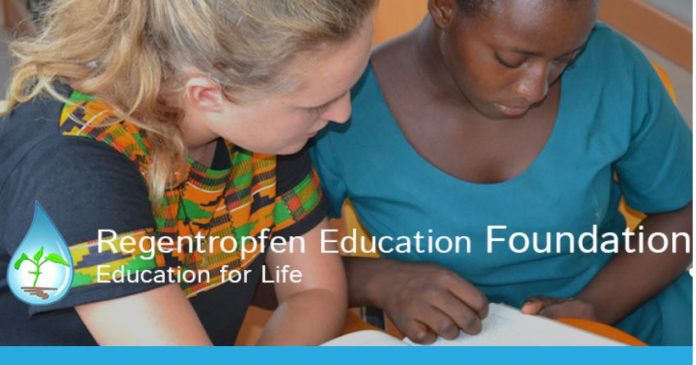 The Regentropfen Education Foundation, a non-government organization (NGO), that provides support to the needy but brilliant students in Northern Ghana, has been adjudged as the best Social Institution in Northern Ghana for the Year 2017.

The maiden edition of the Northern Investor Awards, sponsored by the Investment Consult, Buta Photography, Tamale Film and Television Academy, the Ghana Young Entrepreneurs, Gye and held in Tamale, was aimed at encouraging investment of any kind within the three Northern Regions of Ghana.

The founder of the Regentropfen Education Foundation, Reverend Father Moses Asaah , who is an ordained Catholic Priest, a social worker, and a philanthropist established the foundation in 2012 and had over the years supported over 500 students in addition to the current 230 students who are into the various tertiary institutions throughout the country including Senior High and Junior High Schools. Whilst most of the beneficiaries have completed their programmes and working, others are also in school with many of them pursuing post graduate studies.

Apart from the foundation provision of sponsorship packages to the brilliant but needy students, the Catholic Priest through the support of the Stiftung Regentropfen and individuals donations from Germany, had built a university called Regentrophen University College of Applied Sciences (ReCAS) at Kansoe, a village near Namoo

The University College which is accredited by the National Accreditation Board (NAB) and only three kilometres away from the border to Burkina Faso , creates the platform for young men and women to develop their talents in various fields including Bachelor and Diploma programmes in Business Administration, Basic Education, Accounting, Computer Science and Information Technology, among others.

The College which also offer French and the Sign Languages as compulsory subjects, through the Regentropfen Education Foundation also offered 30 per cent of scholarships to brilliant but needy students who got admission into the College last year .
Reverend. Asaah through his Regentropfen Education Foundation, also provides food and shelter for orphans and other needy children in the Namoo community in the Bongo District and its surrounding communities of the Upper East Region .

The Paramount Chief of the Bongo Traditional area, Naba Baba Salifu Leemyarum , who commended the founder for his award , described him as man of many parts who was contributing significantly to the general welfare of the people.

The Paramount Chief who stated that the Upper East Region had been classified as one of the poorest regions in the country , indicated one of the major tools that could be used to help address the situation was education.

He expressed the optimism that with the establishment of the Regentropfen Education Foundation and the University College, it would help contribute to addressing poverty in the District and the region as a whole.

“ I was not surprised when Reverend. Asaah’s Foundation was adjudged as the best Social Institution in Northern Ghana for the Year 2017. In fact his contributions in the area of education cannot be quantified. The foundation’s provision of scholarships to the greater number of students and the establishment of the University College cannot be overemphasized. I think Reverend Asaah’s contributions to the people especially the vulnerable in the region did not go unnoticed when he was nominated to participate in this year’s MTN Heroes of Change. I think he deserves not to only to be recognized nationally but globally. Rev. Asaah has remained commitment to the vulnerable people in society”, the Paramount Chief stressed.

Naba Leemyarum who called on the beneficiaries of the foundation and the University College to cease the opportunity granted them to study hard to help contribute their quota to the reduction of poverty in the region, also called on citizens in the region and beyond who are financially sound and Corporate bodies in the region to help support the many but brilliant students in the region to complete their education.

The Chief Executive Officer of Investor Consult, Prince Siita Hissan Sofo, said the event sought to encourage investors and entrepreneurs in Northern Ghana to favourably compete with their southern counterparts.

According to him, over 200 nominations were received for 17 different categories and eventually 56 entries were shortlisted for the awards.

Speaking to the Media on behalf of the founder of the Regentropfen Education Foundation after the award ceremony , Mrs Cynthia Apuusiyine, Head of Finance and Administration of the Foundation, said as a Catholic Priest, a social worker, and a philanthropist, the founder believes that every human person is made in the image and likeness of God and when empowered could help actualize one’s dream in life.

“The founder believes that no child should suffer the way he suffered when he was young and that prompted him to set the Regentropfen Education Foundation and the University to support the people particularly the vulnerable in society”, he indicated. She aid the founder had also initiated the move to build Regentropfen basic, Senior High technical , happy home for orphan children as well as procure acres of land to build hospital for the vulnerable particularly women and children.

Most of the beneficiaries who the GNA spoke to , stated that it would have been impossible for them to continue and complete their education without the support of the Regentropfen Education Foundation.

“Had not been for the support of the Regentropfen Education Foundation, I wouldn’t have been able to continue my post graduate studies at the University for Development Studies as I lost my father who used to support my education “ Mrs Gifty Akapule, one of the beneficiaries remarked.

The Regentropfen Education Foundation received Certificate of Excellence award and a trophy in recognition of its outstanding contribution to the Development of Northern Ghana.
The deserving awardees were from government, the hotel and tourism industry, social entrepreneurship, health, education, media, agribusiness and fashion among others. They included the Vice President, Dr. Alhaji Mahamudu Bawumia, Minister for Zongo and Inner City Development, Alhaji Boniface Abubakari Saddique, the immediate past Central Bank Governor, Dr. Nashiru Issahaku, and Minority Leader of Ghana’s Parliament, Hon. Haruna Iddrisu.