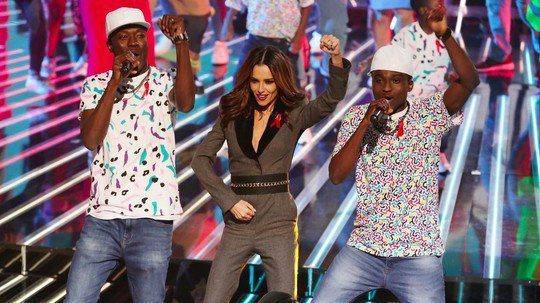 Ghanaian based UK duo Reggie and Bollie have hinted of releasing a new hit single very soon when they arrive in Ghana on April 26, 2016.

According to the group, they cannot wait to connect with their fans in the country. Reggie and Bollie were the first runner up for UK-Xfactor reality show.

The group has been out of the country close to six years.

Speaking on Ultimate brunch hosted by Naa Klordey Odonkor, all the way from the UK, Reggie and Bollie explained ‘We are coming to Ghana next week which is on the 26th of this month, April, to come and shoot our video in Ghana. We are really excited about this; we can’t wait to connect with the fans and people of Ghana’.

The duo noted that the yet video to be shot will portray the cultural values and exciting tourist sites in Ghana.

‘Definitely I know we will shoot something in Accra. The other towns and cities that I don’t know of, the good thing is that this video is supposed to portray the cultural values of Ghana, the tourist attractive areas of Ghana. We are really excited, so wherever we have to shoot in Ghana that will bring out that positive image of Ghana that will be great for us,’ he emphasised.

Reggie and Bollie, who are tight–lipped about the title of the single indicated ‘It’s going to be a danceable, catchy tune. I think people from all over the world are going to love this song; it’s a song that cuts across. We’ve got elements of afro beats and pop. It’s just a mixture of everything and hopefully, it gets everyone dancing’.

They revealed that the Director of the video who goes by the name “Fatal” has directed videos of both International and African artistes such as Davido, Meek Mill, D’banj’s Oliver Twist, Kanye West and Snoop Dogg.

‘He has done some really big jobs but we don’t know his current location because he travels around the world working but we know definitely he will be in Ghana to shoot with us when we come down,’ they said.

Asked if Simon Cowell will be in Ghana since the group is on the Syco Simon Cowell music record label, they explained ‘No we wish we could but Simon is such a busy man, I think at the moment he is filming Britain’s Got Talent and all of that. We wouldn’t be coming with Simon’.