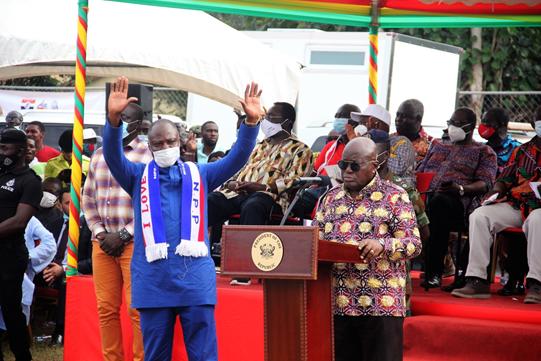 The incumbent New Patriotic Party should be wary of dissident members contesting as independent parliamentary candidates in the December elections, as that could sabotage the party, President, Nana Addo Dankwa Akufo-Addo, has cautioned.

“The rank and file of the Party should resolve to reject dissident members contesting as independent candidates,” he noted, saying they should vote against them in the parliamentary elections.
“We must not tolerate those who profess to be members, but do not believe in the party’s ideologies and principles.

“I cannot work with any self-acclaimed member who flouts the Party’s rules and regulations and the laid-down structures with impunity,” he told the Party faithful at separate campaign rallies at Tepa and Mankranso in the Ashanti Region.

President Nana Akufo-Addo, who was in the Region for a three-day working visit, said those who had decided to contest as independent candidates ought to be shown their rightful places.

“You should not vote for such characters since they are only out there to create confusion,” he insisted.
Some aggrieved NPP members who claim to have been unjustifiably disqualified from contesting in the recent primaries of the Party, have resolved to go solo as independent candidates.

Constituencies of the Party, including; Asokwa, Bekwai and Ahafo-Ano-North, had seen tension escalating within their rank and file, following the decision of the aggrieved members to stand as independent candidates.

Surprisingly, the embattled members, though contesting as independent members, have appealed to the electorate to endorse President Nana Akufo-Addo for a second term in the polls.

It could create division within the ruling NPP, which secured more than 1.6 million votes in the Presidential race of the 2016 elections, and also won 44 seats out of the 47 constituencies in Ashanti, a traditional stronghold of the Party.

President Nana Akufo-Addo justified why the NPP should be retained for a second term, saying the socio-economic strides made by his Administration ought to be continued.

“The NPP is delivering on its campaign promises, therefore, Ghanaians should vote massively to retain it for the benefit of the country,” he noted.