Frustration with the search for flight MH370 boiled over into chaotic scenes as Chinese relatives were dragged away from journalists.

They were attempting to speak to Chinese journalists outside the daily press conference in Kuala Lumpur.

A BBC reporter was pushed away from the relatives who were carrying banners criticising the handling of the case.

Teams from 26 countries are trying to find flight MH370, which went missing on 8 March with 239 people on board.

The Malaysian government said later it regretted the scenes involving passengers’ relatives and “one can only imagine the anguish they are going through”.

During the daily briefing, Malaysia’s acting Transport Minister rejected reports that emerged on Tuesday that the plane was spotted in the Maldives.

A local councillor on the island of Kudahuvadhoo has told the BBC that about 10 people described seeing a large aeroplane some hours after it disappeared.

Hishammuddin Hussein also said the authorities had investigated almost all the passengers and crew of the plane, but had so far found no information of significance.

“We have received passengers’ background checks from all countries apart from Ukraine and Russia,” he told reporters. There were two Ukrainians and one Russian on the plane.

In the briefing, it was also revealed that some data had been deleted from the flight simulator found at captain Zaharie Ahmad Shah‘s home, and that investigators were trying to recover the deleted files.

Mr Hussein stressed that the captain should be considered innocent until proven guilty and that members of his family were co-operating with the investigation.

Chinese citizens made up the overwhelming majority of the passengers on the plane, which had been heading from Kuala Lumpur to Beijing.

Responding to complaints among relatives of those on board that they are not being kept fully informed, the Malaysian authorities said they would send a team to Beijing to liaise with Chinese families waiting for news.

The massive air and sea search is concentrated mostly around two possible routes taken by the Boeing-777, one stretching north into central Asia, the other south across the Indian Ocean.

Police in the Maldives have said they are looking into local reports that a low-flying aeroplane was sighted above Kudahuvadhoo, south-west of the capital Male, early on 8 March.

However the Maldives armed forces say flight MH370 did not appear on any military or civilian radars in the country.

Maldivian news outlets have quoted the islanders as saying they saw a low-flying passenger jet at around 6:15 local time (1:15 GMT) on 8 March and that its colours matched those of the missing plane.

If the plane was indeed flight MH370, it would have flown far slower than normal, in order for the timings to be possible, reports the BBC’s Charles Haviland in nearby Sri Lanka.

The Maldives National Defence Force said that although nothing had been detected on its radar, or that of civilian airports, it would provide any assistance needed for the search.

The main Maldives airport is one of those featured in the flight simulator discovered at the home of the captain of flight MH370. 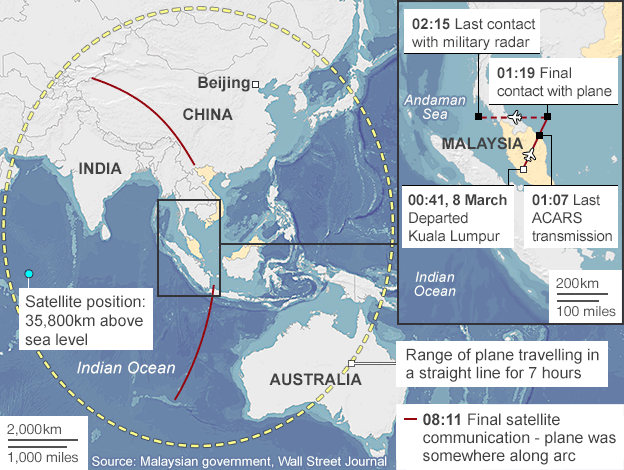