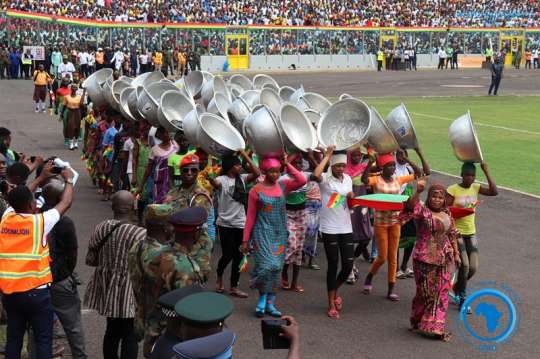 They are known in the local parlance as kayayei, literally translated as head porters.

Generally, these migrant head porters, majority of them being females coming from the northern sector of the country to seek greener pastures in the cities, have over the years had their own stories to tell – the hazardous nature and merits of their work.

Imagine the inconvenience many traders, sellers and buyers alike would have gone through, but for the availability of the kayayei to augment the supply chain at Ghanaian markets.

The socio-economic status of the kayayei in spite of the difficulty associated with their working environment is not the best, the least said of it the better.

The ‘kayayei’ works averagely 11 to 12 hours a day with varied meager incomes, depending on the market, volume of cargo and distance to be covered.

As a boy growing up in a Zongo community in Kumasi, the kayayei’s situation could be described as one of the most unfortunate as they were largely concentrated in slums in suburbs such as Aboabo Number One, Aboabo Number Two, Alabar, Akwatialine Sawmills, Dagomba-Line, Moshie Zongo, amongst others.

The deplorable nature of their places of abode with particular reference to the poor sanitary conditions and make-shift wooden structures in which they found themselves added to the burden of these underprivileged ones.

Their vulnerability usually exposed them to human rights and sexual abuse with its attendant negative consequences, including unwanted pregnancies and sexually-transmitted infections.

In 2006, the United Nations Children’s Fund (UNICEF) in a report estimated that the kayayei accounted for almost 90 per cent of school drop-outs among girls in the then three northern regions – Northern, Upper-East and Upper-West Regions.

Today, the figure has reduced by more than fifty per cent due to the proactive measures instituted by successive governments working in collaboration with civil society and international organizations, human rights organizations and traditional authorities.

As Ghana climaxed 63 years of independence with a colourful parade and march pass, held at the 42, 000-capacity Baba Yara Sports Stadium, Kumasi, one particular group whose performance caught the attention of the teeming crowd was the ‘kayayei’.

Carrying their trademark head pans, and led by the indefatigable Mma Adiza Zango neer, an advocate for the rights of the kayayei, the group marched confidently through the tartan tracks, and drawing applauds from the invited guests and general public.

“We are happy that today, the kayayei have also been recognized and invited to take part in this historic event,” an elated Adiza told the Ghana News Agency (GNA), on the sideline of the programme.

Therefore, it is important that society takes a sober reflection of the contributions of the kayayei to the market supply chain since independence, and how their socio-economic fortunes could be improved for their wellbeing.

The health implications associated with kayayei having to carry large volumes of goods for longer periods, and other pertinent issues, should be given due consideration in our deliberations.

More importantly, there must be increased efforts at investing in projects, initiatives and programmes to help empower women with the requisite academic and employable skills to enhance their living conditions.