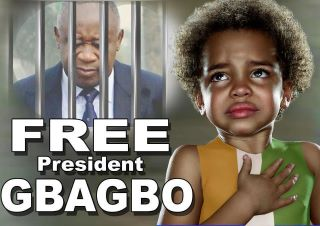 A collective bringing together some 30 Ivorian and African organizations in Europe celebrates Christmas with President Gbagbo before the detention Centre of the International Criminal Court (ICC) in Scheveningen, a suburb of the Hague, Saturday, December 24, 2011, from 13 h to 17 h.

The operation “Christmas Eve with Gbagbo” will bring …together thousands of people. The objective is to reaffirm the support and love of African peoples for President Laurent Gbagbo, elected President of Côte d’Ivoire, but also to denounce his illegal and inhuman deportation to the Hague and the political nature of the action of the ICC in Côte d’Ivoire and Africa.

This event, authorized by the police Dutch, will be the occasion to demand that Mr. Alassane Ouattara and Guillaume Soro, the real and only guilty party to these heinous crimes perpetrated in Côte d’Ivoire, are brought to justice.

Gifts will be given to the authorities of the prison to President Laurent Gbagbo. A concert with several Ivorian and African artists will take place on the site, and then Saturday night in a room party rented specially for children and families.

Ivorians and Africans of the diaspora are therefore invited to meet as early as Friday, December 23, 2011, to 23: 30, in front of the “Gare du Nord” train station, in Paris, where several cars bound for the Hague will be made available to them. Several convoys are also planned at the start of some major European cities: Brussels, London, Geneva, Berlin, etc.

The operation ” Christmas Eve With Gbagbo”, in the Hague, is held under the auspices of the CPAD (the Steering Committee of the Actions of the Diaspora) in partnership with the following partner associations: CADSCI-Holland, CRI – TD (circle of reflection and Initiatives for a democratic Togo), COPACI, COTE d’Ivoire COALITION, COJEP EUROPE, Pan-Cree-African, CADIS-Switzerland, COORDINATION of the PATRIOTES of the Kingdom United, CURCI, CUR Italy, CRD France, COJEP Europe, CPAD (Belgium-Luxembourg-France-Scandinavia-Spain, etc.), CODESCI-PANAFRICA, FPI France, women Patriots France, women Patriots of LYON, MER, MIR France, ZÉRO, artists of the DIASPORA Patriots, etc.

Text translated from original French by the Social Media Outreach of the Pan-Africanist International, which is in TOTAL SOLIDARITY WITH THE GOOD PEOPLE OF LA COTE D’IVOIRE!