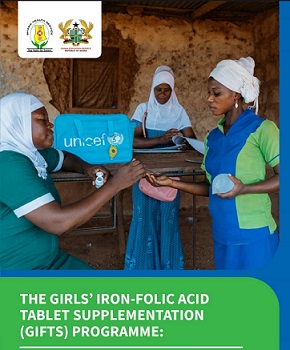 In and out of school adolescents receiving the Girls’ Iron-Folate Tablet Supplementation (GIFTS) has been advised to report any suspected serious side effect to the nearest hospital.

The GIFTS programme is a collaborative initiative between the Ghana Health Service (GHS), Ghana Education Service (GES) and the United Nations Children’s Emergency Fund (UNICEF) and other key partners to weekly provide iron and folic acid supplements to adolescents who are either in or out of school to supplement their needed blood quantity.

Mr Samuel Atuahene Antwi, Tema Metropolitan Nutritionist in an interview with the Ghana News Agency in Tema said reporting serious side effects to the hospital would enable health officials to conduct further investigations and put in the right intervention to address the issue.

Mr Antwi said just like other drugs, the iron-folate tablets could also lead to some adolescents experiencing some side effects including change in colour and consistency of stools, increase in menstrual pains, reduced or increased days of menstrual flow, among others which could be due to the correction of the cycle and HB/folate deficiencies.

He said side effects are expected to be corrected within some time as the body get used to the tablets.

He said however that if the side effect worsens it was best to report it at the health facility for investigations saying a similar incident was reported in Tema concerning allergies but investigations which included testing the tablets revealed that the girl’s reactions had no correlations with the intake of the supplement.

He encouraged parents and adolescent girls to freely walk to the health centres with their issues instead of resorting to social media as the act does not guarantee the needed solution while it ended up creating unnecessary disaffection for such well-meaning interventions.

Throwing more light on the necessity for the GIFTS intervention, Mr Antwi indicated that during adolescence, there was rapid growth and development which required more blood, coupled with a monthly loss of blood due to menstruation necessitated the administering of the GIFTS as iron and folic acid were two important nutrients needed to form and replace lost blood.

He explained that researchers from various health partners had shown that even though adolescent girls needed enough iron and folic acid for development, most of them do not eat enough of the foods that help the body make blood therefore there was the need for an intervention to prevent them from being anaemic.

Mr Antwi said one might know they were anaemic when their palms, nail beds, and inner eyelids become pale, easily feeling tired, as well as being weak often.

He under the GIFTS programme, the iron-folate tablets were provided for the girls in school girls both junior and senior high schools as well as vocational and technical training institutions every Wednesday after the mid-day meal throughout the school term with supervision from their teachers.

He added that the out of school adolescent girls which included those in apprenticeship on their part were provided with a monthly supply of the tablet at a health facility within their localities for them to take weekly on Wednesday after taking their mid-day meals.