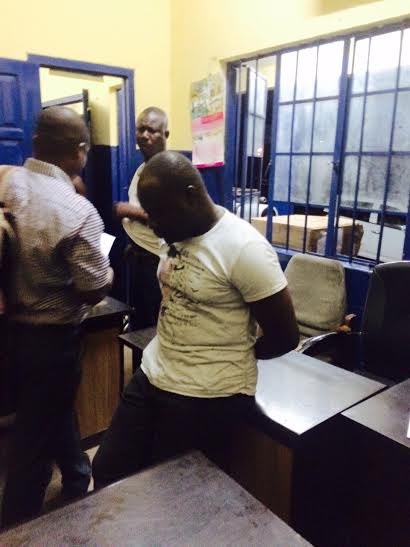 Anthony Sarfo in the grasp of the Ghana Police

Ghbase.com reporter Anthony Sarfo has been arrested by Police for allegedly attempting to blackmail and extort money from Asamoah Gyan to kill a story of his alleged sexual episode with one Sarah Kwablah.

The reporter is alleged to have demanded a huge amount of money from the manager of the Black Stars captain, Samuel Anim Addo for him to stop running malicious stories on Gyan.

Sarfo threatened to release a video of Asamoah Gyan having sex with Sarah Kwablah if his demands were not met.

He also threatened to release a series of malicious stories with the sole purpose of disgracing and cause public disaffection for the new Shanghai SIPG recruit.

Following news of Asamoah Gyan?s mega move to China, the reporter, sensing there was an opportunity to make money, made a huge financial demand on Asamoah Gyan through his manager Samuel Anim Addo in order to stop running the malicious publications.

His demands, aside going against the professional ethics of journalism is an upfront to the laws of Ghana.

?Whoever extorts any property from any person by means of threat shall be guilty of second degree felony,? says Section 151 of the Criminal Offences Act ? 1960 (Act 29) i.

Three grabbed for robbing and kidnapping a Nigerian lady