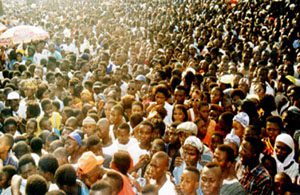 A group of young socialists will on Tuesday July 1, 2014, march through the streets of Accra to solicit the support of the citizenry for the President, John Dramani Mahama, and the government of Ghana. ?We are in trialing times; times when every leader needs the total support and commitment of those he/she leads. The time is now,? a release issued on Sunday by the group stated.

?You are all kindly requested to join in this history making March. We shall all converge at the Independence Square at 7am and move together amidst brass band music. Time to show total support for this government. It is never too late to redeem what is ours,? the release further stated.
According to the organizers, the march has been code named ?PROTECT MY GOVERNMEN?. They are therefore urging all supporters and sympathizers of the John Dramani Mahama led administration to turn up in their numbers to as a way of showing loyalty to Ghana.

One Thousand-Man March in support of President John Mahama

Beloved countrymen and women, our country is going through some tough times, and it is important to recall that no less a person than President John Dramani Mahama himself has acknowledged that fact.

It is also important to recognize that through his actions and policy initiatives, President Mahama is working towards reversing the negatives, especially the economic indicators. The good news is that some of the stringent measures taken by the government are yielding good results. ?Economic statistics suggest that the situation is improving although we would all like the pace to be faster.

It is clear that some of these ad-hoc measures were politically difficult to take, but the President put the national interest ahead of pure political considerations.

That is why we must support President John Mahama in his quest to better the lot of this country, and prepare us all to take advantage of the opportunities that a revived Ghanaian economy will bring. Fellow countrymen and women, diligent handling should be preferred by all to an economy managed on the basis of political populism.

The Made in Ghana Campaign by President Mahama is a campaign we must all support. As individuals, businesspersons and manufacturers, we all have a role and must play these roles effectively towards supporting our economic transformation process.

Buying products manufactured in Ghana and by Ghanaian workers has major advantages for our economy.?It allows more jobs to be created absorbing our growing young population, and improving our economic dynamics. Our preference and purchase of Made in Ghana products will also encourage many Ghanaian business owners to venture into local production as against importing and growing the economy of other
countries.

Is there any reason anybody could possibly have against supporting this campaign and promoting the use of Made in Ghana products?

For some very funny reason, including political, some people even before the senior national team crumbled out of the 2014 World Cup, started an agenda to unnecessarily roll the President into the problems in the Black Stars camp. This was done despite the President?s personal and required interventions aimed at boosting the
morale of the team ? calling and sending them motivational messages before their matches.

Ironically, these same people were the very ones who accused and criticized the previous NDC administration under President John Evans Atta Mills when it proposed that football administration in the country should be streamlined.

While the President and government cannot effect changes to the GFA or determine who heads the GFA, we must in unison support the call by the President (in an interview in Malabo) that our participation in the Brazil tournament must be reviewed and a rebuilding exercise started. This is a cause that we must all support.

The disgraceful and international bad press the country?s image suffered must never be repeated, and that can only be achieved if we all support the President?s effort. The Brazil embarrassment must be unraveled, and it must not matter who is involved, whether the GFA, the Ministry or other third parties.

President Mahama is a listening president and that is why we all need to rally behind him for Ghana to succeed. To chart our future path, we must take cognizance of our history. There are past presidents of this
nation who would not act on suggestions from the people. President Mahama has changed this ? he has made government by the people a reality. He has listened to the call to clean up the Ministry. It is now the turn of the GFA to be cleaned and its house put in order.

As the economy begins to pick up, it is important that together, as one people, we do not allow political miscreants from both ends of the divide to deceive us.