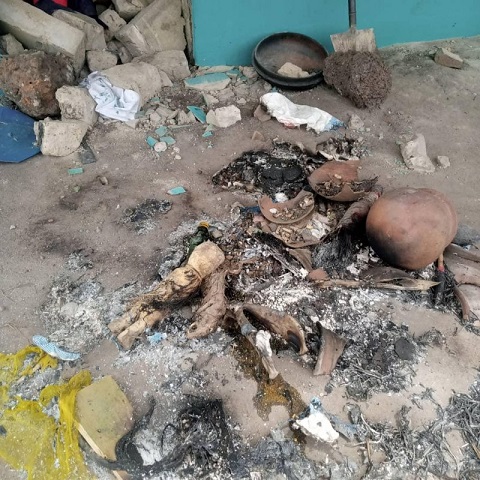 Residents of Ndowukope, a farming community in the Akatsi North District of the Volta region together with their Assembly member, have burnt a shrine and other houses belonging to a fetish priest and his accomplices in the area for suspected ritual murder.

They accused fetish priest of masterminding the kidnapping of one Nicolas Doe Negble, a 12 year old pupil of Keyime DA basic school for alleged ritual purposes.

Mr Reuben Dogbey, uncle to the deceased, in an interaction with the Ghana News Agency (GNA) said the deceased, who resides with his grandmother, Mary Amewonu at Noanyikpo, a village within the Agotime Ziope District of the Volta region got missing during a funeral programme on May 21, this year, and attempts to trace him had yielded no positive result.

He narrated that, Torgbui Dzisah IV, the ‘Dufia’ of Noanyikpo, was later informed about the missing boy so that they could expedite action on searching for him.

Efforts by a member of the community who suspected one Senanu Attipoe, Uncle in-law to the deceased, who was heard on call concerning grabbing of an animal at the funeral ground, forced the chief to invite the suspect for questioning.

Mr Dogbey said the suspect was hesitant in answering the accusations levelled against him which further compelled the elders to report the matter to the Police at Ziope.

Senanu Attipoe was later arrested by the Police at Ziope for further interrogation after, which he confessed to have had a knowledge of the killing of the pupil.

Mr Dogbey said the suspect after interrogation, mentioned Anani, Morris, and Ando Kofi as those who have masterminded the killing of the deceased for ritual purposes at Ative Nudowukope after he captured the deceased for them.

The suspect, the GNA gathered, led a team of policemen to Nudowukope where the remains of the deceased ws being kept at a shrine belonging to Ando Kofi, the key suspect currently at large together with his other accomplices.

“The suspects however, fled the village after hearing the Police was chasing them,” Mr Dogbey said.

The Police after a failed attempt to arrest the other suspects, secured a court order and broke into the rooms of the suspects where they later discovered the decomposed remains of the deceased, with parts of the body removed and his head cut off and buried in a room belonging to Ando Kofi.

Mr Agbesi Nudowu, the Assembly member for the area who led the police team to the area, also disclosed that they discovered other human skeletons apart from the decomposing body of the deceased.

“We destroyed the entire shrine and set the houses ablaze in the process,” an angry assembly member.

The remains of the deceased was later sent to the Police Hospital in Accra for autopsy and later handed over to the family for burial at Have-Glime on Tuesday June 1.

The Police has since confirmed the incident to the GNA.

The Police has mounted a manhunt for ‘hunor’ Ando Kofi, prime suspect, Anani, Moris and others, who are currently at large, whilst three other suspects have been apprehended by the Police including Senanu Attipoe to assist in investigations.