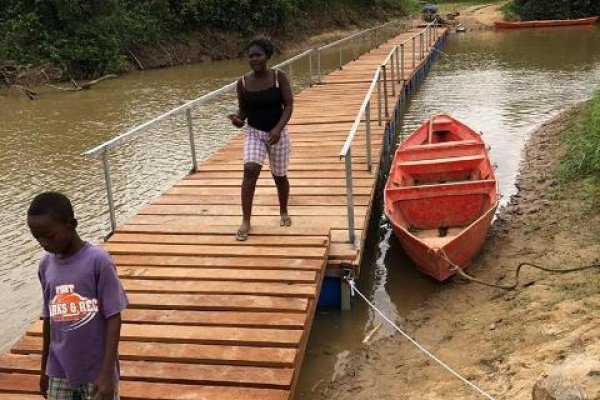 He said preliminary assessment done indicated that, “Some persons deliberately went and loosened the end rope anchoring the concrete cast, which made the bridge shift from its original location. The bridge is not broken,” he said.

Speaking in an interview with the Ghana News Agency, on Thursday, Mr Ofori said the bridge was built to withstand strong pressure due to the use of empty barrel, which made it float at all times.

He recalled that on Sunday, April 26, he received a call from one of the residents that the bridge had collapsed which his team followed up to the site.

Mr Ofori narrated that, when the team got there, they observed that parts of the bridge were dismantled and the barrels taken away.

“I have the pictures and videos showing some residents were jubilating when the bridge was washed to another side. It is sad and surprising that people will sit and hatch such a plan because of reason best known to them. This is unpatriotic and must stop,” he said.

“Prior to the building of the floating bridge some youth earlier built a makeshift one and charged 20 pesewas per crossing. Those behind that activity raised objection in the initial stage and I do not want to believe they are behind this”.

Mr Ofori said acts such as that impeded development and that such indiscipline behaviours would not propel progress adding that the bridge was blocking plastic waste from entering the sea allowing only water to enter.

He stated that similar bridges were built to facilitate the movement of persons on Rivers Offin, Ankobra, and Pra, which were still in good shape serving their purpose.

“The one on Chemu is the fourth and last one and I was surprised when I got the news that it was broken and washed away.

The first one, which was built on River Offin is more than a year now and it is able to withstand high water current. It is the same thing we built here,” he said.

Mr Ofori explained that the bridge was constructed by joining rectangular wood strips, strapped to one another in a sequence, over a number of empty barrels fitted together firmly with steel round pipe rails to prevent it from falling over.

The empty barrels, he added provided the bridge with a floating ability to ensure that any time the lagoon overflowed its banks, the bridge automatically rose or floated and returned to its current position when the floods subsided.