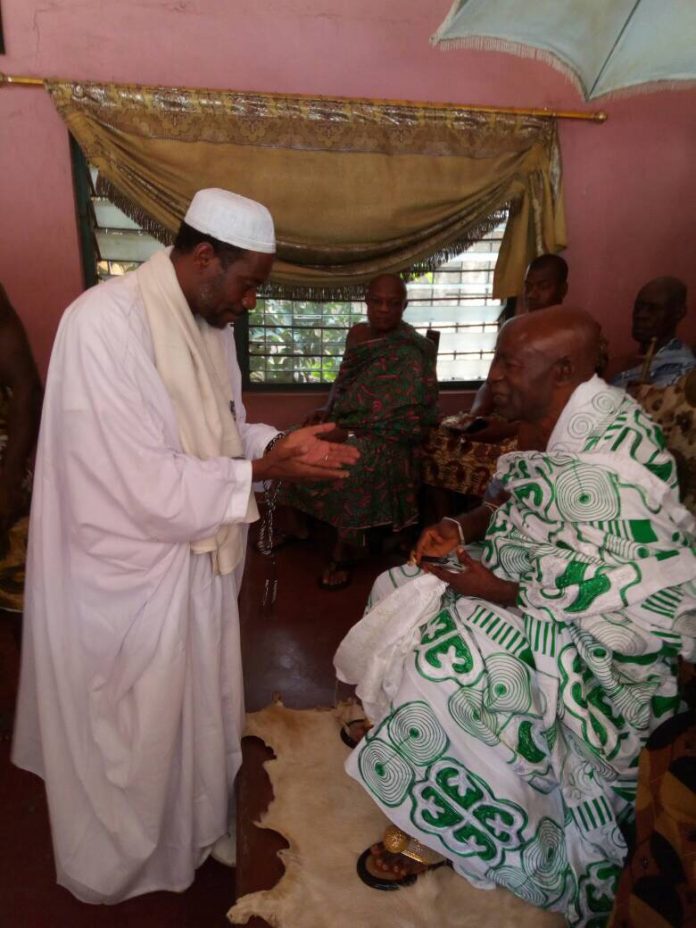 It ca be recalled that in February 2015 there was a clash between some youth of Tafo Zongo and the Tafo traditional council over the erections of fence wall around the Tafo Muslims cemetery to prevent encroachers. This resulted in fight which led one person from the Zongo youth to lose his life.

Several attempts made to restore peace between these two factions proved futile. The president and spiritual leader of Tijjaniya Muslims council of Ghana Shaikh Ahmed Abulfaid Maikano Jallo made it possible for the Tafo Zongo and the Tafo Traditional council to reconcile.

As part of the delegation were tribal chiefs of Tafo Zongo,Magajiya (queen Mother) the Tafo Chief Imam and the Youth leader of the area.In his speech, the Tafo Hene Nana Agyen Frimpong Ababio showed disappointment in the Zongo Chiefs for not stepping foot in the palace when the incident happened until today.”You were happy when I was beaten.

If not because of* *Shaikh Ahmed Abulfaid, I wouldn’t have allowed you into this palace he said.Khalifa pleaded on behalf of people of Tafo Zongo.His plea was accepted and the chief requested from Khalifa to pray for his people,the Ashanti kingdom and Ghana at large.Earlier, Thr Tafihene had a close door meeting with Khalifa.

Smoke Detected In EgyptAir plane Before Falling Into The Mediterranean