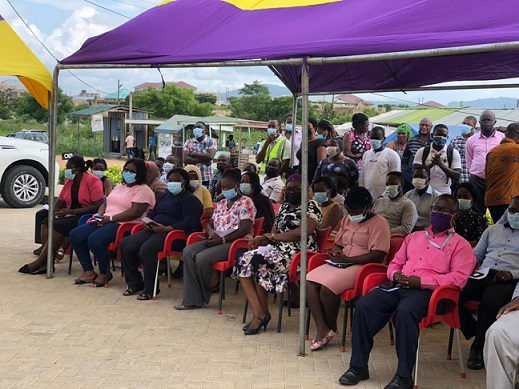 Staff of the Awutu Senya East Municipal Assembly have called on the Regional Minister to as a matter of urgency rectify administrative and regional boundaries between the Greater Accra and the Central Regions.

The staff said the issue had become thorny for the people especially for revenue collectors in the area and asked that she met relevant stakeholders to resolve the problem peacefully and amicably.

They raised the concern at an open forum with the Regional Minister, Mrs Justina Marigold Assan when she paid a working visit to the Assembly to officially introduce herself and interact with them.

They appealed to the Minister to expedite action as the outstanding issue was affecting the Assembly in its revenue collection because the Ga South Assembly had been interfering in their duties.

Some staff alleged that they have been arrested before by the Weija police for executing their lawful duty and called for an emergency meeting to be held to know the boundaries between the two Regions to resolve the issue.

“ I have been accosted by the Weija Police concerning this issue and I’m a victim to this so am pleading that the necessary actions should be taken to resolve the issue”.

Ms Abiba Sadia, a staff at the Assembly, appealed to the Minister to initiate a staff bus to be transporting them to avoid lateness to work and stress due to heavy traffic on that stretch of road.

She called on the government to urgently develop the road networks in the area to enhance easy movement and economic development.

Ensuring peace to reign in the two Regions, Mrs Assan assured to engage the Greater Accra Regional Minister, Mr Henry Quartey to deliberate on the issue and resolve it peacefully.

“ I would meet with my colleague Minister and we would resolve the issue for peace to reign” she added.

The Minister told the staff to bring on board new innovations and creative ideas in transforming the Region as their involvement will make it a reality.

She cautioned them to desist from party politics and focus on their core mandate and remain technocrats at all times.

Mrs Assan urged them to have a cordial relationship with colleagues, ensure positive work ethics to enhance productivity.

She told the management of the Assembly to award deserving staff, motivate them and build their capacity to make them feel comfortable and offer their best at the workplace.

The Minister called on the planning department to monitor and maintain peace, unity and stability in the Assembly.

Mrs Assan on a day’s tour in the Awutu Senya East Municipal and West district paid a courtesy call on the traditional areas to introduce herself and solicit their support to transform the Region.