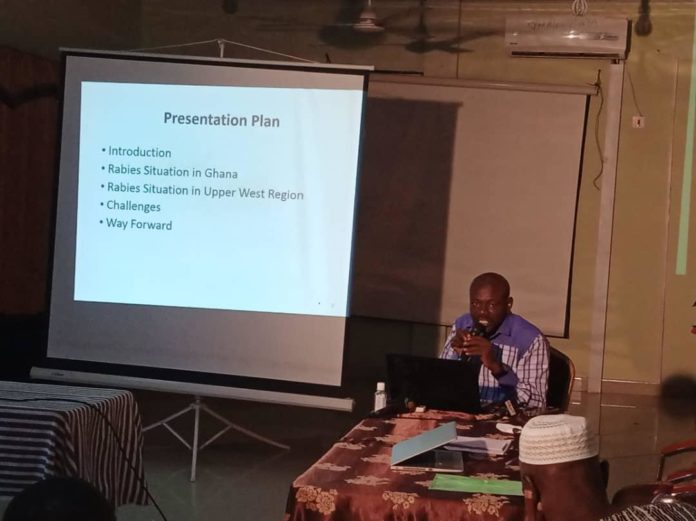 He said out of an estimated dog population of 36,171, only 1,946 have been vaccinated from January to June 2020 in addition to a total of 42 cats bringing rabies vaccination coverage to 5.38 per cent in the region.

Four out of 16 rabies deaths recorded in 2009 to 2010 were from the Upper West Region according to him.

Dr Sako said this during a media sensitization programme on rabies prevention in Wa organised by the Breakthrough Action Project which is being collaboratively championed by the Veterinary Services Directorate, the Health Promotion Division of the Ghana Health Service, Rabies in West Africa (RIWA) and the USAID.

Explaining what rabies is Dr Sako noted that it was a vaccine-preventable viral zoonotic disease of mammals transmitted through animal bites, stressing that 99 per cent of all human rabies infections were dog-mediated.

He noted that according to data from the World Health Organisation (WHO), rabies was estimated to cause 70,000 human deaths annually in over 150 countries and territories with 95 per cent of cases occurring in Africa and Asia.
According to the WHO data, the annual death toll of the disease in Africa was 24,000.

Dr Sako noted that rabies was endemic in Ghana and occurred mainly in poor rural communities, noting that the country recorded 147 human deaths from 1998 to 2003.

Dr Meyir Y. Ziekah, Wild Life Division/Manager of the Kumasi Zoo, noted that rabies was a 100 per cent preventable disease but that thousands of people die from the disease around the world due to ignorance.

He noted that signs and symptoms in animals include an exhibition of high aggression, attempt to bite other animals or humans without fear, having plenty saliva/foam at the corners of the mouth, difficulty eating/swallowing and difficulty moving or walking in a straight line among others.

In humans, he said the signs and symptoms include fever; headache; easily becomes annoyed/angry; nervous and confused; seeing things that do not exist; fear of water/air/light; and inability to move parts of the body.

To stop rabies, Dr Ziekah advised that one must get rabies treatment immediately if bitten or scratched by an animal, stressing that once one begun to show signs and symptoms of rabies infection, the result would be death because the disease was not treatable.

He, therefore, advised dogs and other pet owners to vaccinate them against rabies and keep them in an enclosed area to prevent them from coming into contact with other animals from outside.

Vivian Abiwu, Senior Programme Officer for the Breakthrough Project, said the goal of the workshop was to provide the requisite knowledge on rabies prevention and control whilst creating a cadre of public educators to sustain the momentum generated through the 2020 World Rabies Day event to take place in the Upper West Region, by strengthening social and behaviour change communication on dog bite prevention and management.

The World Rabies Day which is an international rabies awareness campaign introduced in 2007 to bring partners together to enhance rabies prevention and control efforts globally has its 2020 theme to be “End rabies, collaborate, vaccinate”.