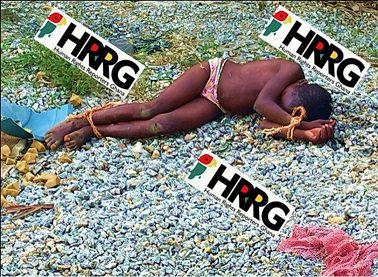 It is true that every parent wants the best for their children and will want to instill discipline into their wards to make them better.

However, the way and manner in which some children are treated by their parents are very inhumane and unspeakable.

The Ghanaian child has to be respected because everyone including children, whether black or white, male or female, and regardless of the place of residence has fundamental human rights that need to be respected.

It is so heartbreaking to see the way some children are subjected to all forms of abuse in the name of instilling discipline.

It is also rather unfortunate that all these abuses are occurring right under the nostrils of Ghanaian Laws concerning human rights, particularly the rights of the child.

The expose by the Human Rights Reporters Ghana (HRRG) which displayed the heart-breaking photograph of a young girl who had both hands and legs tied up and almost naked for several hours by her own father is a breach of human rights at its core.

This is absolutely inhumane and ought to be condemned in no uncertain terms.

Treating a girl of that age in that manner is not something any teenager will wish for. Clearly, the rights of the child have been infringed upon. She has been treated like an animal instead of a human being.

This treatment, apart from it being an infringement upon her right as a child, also has lots of psychological and emotional impacts on her relationship with others in society.

This will be due to the stigmatisation she would be subjected to by her peers and will also live in fear of others in society.

But what does the law say about this brutal act? Article 5 of the Universal Declaration of Human Rights states that “No one shall be subjected to torture or to cruel, inhumane or degrading treatment or punishment”.

This law about human rights has clearly been breached and made of no effect in this case. Also, article 2 of the children’s Act 1998 of the constitution of Ghana states that the child’s best interest is paramount and needs to be upheld.

This brutal action is definitely not in the best interests of any child. Also, article 6 of the Children’s act indicates that every action towards the child should be for his or her survival and development.

With this, I doubt any child can survive and develop in this hostile environment.

The Human Rights Reporters Ghana (HRRG) did a marvelous job by exposing the unfortunate saga which broke out on Friday, July 15, 2022.

Since then, its Executive Director, Joseph Kobla Wemakor, and the team have never rested on their laurels and made several follow-ups on the matter which led to the intervention of the Kumasi Metropolitan Assembly’s Department of Social Welfare and Community Development Ministry of Gender Children and Social Protection (MOGCSP).

The end result which brought the good news about the rescue of the child in September which was celebrated by the world.

This is a gesture the Human Rights Reporters Ghana really welcomed and applauded and even carried out in a publication which attracted global attention as a form of recognition for a brilliant job done by its stakeholders; the Social Welfare Department and the Ministry of Gender Children and Social Protection.

But since this noble intervention by the Ghanaian authorities, no attempt has equally been made to bring the perpetrator of this heinous crime to book.

The Human Rights Reporters Ghana has learnt with utmost shock father of the victim, Yaw Asanga, a former security officer; an employee of Okomfo Anokye Hospital in the Ashanti Region is still walking a free man despite assurances from Mr. Godfred Abogo, the Unit Head for the Department of Social Welfare at the Kumasi Metropolitan Assembly that he is under investigation and would surely be handed over to the police for prosecution.

The question is, five (5) months ago since this issue broke out, what has stopped the Ghana Police Service from prosecuting this criminal through support from the KMA Department of Social Welfare in the Ashanti Region?.

We are much aware that the Ghana Police Service is privy to this sensitive saga which has become of public interest due to its magnitude.

We are also of a firm belief that both institutions are working together for the common good of humanity and to resolve issues of this nature as far as human/child rights are concerned. So what stops them from doing their work?

Beyond the shock, the Human Rights Reporters Ghana is also learning that one of its sources (an eyewitness of this saga) almost got lynched by the same perpetrator last month for reporting the incident to the staunch human rights group which led to the rescue of the 7-year-old victim.

According to the HRRG’s beleaguered source who narrowly escaped from being lynched, Yaw Asanga (perpetrator) mobilized a group of young men to beat him up after they chased after him upon his visit to the same vicinity where the bizarre incident happened.

He, however, escaped through the intervention of a woman (a “Good Samaritan”) who came to his rescue by opening her house gate for him to hide in the house after which he managed to escape through the backdoor. The HRRG’s source (name withheld) wondered why his good deed which led to the rescue of that unfortunate child would land him into trouble to the point of even costing his dear life.

Quite a sad development there. This could only be attributed to the porous work done by the authorities for not bringing Yaw Asanga, the perpetrator to book. The Human Rights Reporters Ghana is currently investigating this matter which has become of grave public interest thoroughly and would make its outcome as soon as possible.

As a concerned advocate for the speechless, I suggest that this matter should be looked into very well and all those involved in this child’s maltreatment should be dealt with ruthlessly according to the law. This will serve as a deterrent to anyone who flouts the laws governing the fundamental rights of the Ghanaian child.

The Department of Social Welfare at the Kumasi Metropolitan Assembly must visit the drawing board at once and help complete the good work it has started. It should collaborate with Ghana Police Service to arrest and prosecute Mr. Yaw Asanga, the tyrant who brutally assaulted, tortured, and abused his 7-year-old girl for stealing a ‘common’ biscuit.

I humbly call on the Inspector General of the Ghana Police Service, Dr. George Akuffo Dampare, and the Minister of Gender Children, and Social Protection, Lariba Zuweira Abudu to immediately step in and put pressure on their men to work to ensure that justice is served the victim and the perpetrator is brought to book to serve as a deterrent to others lawbreakers.

UDDT is paramount in protecting underground and surface water