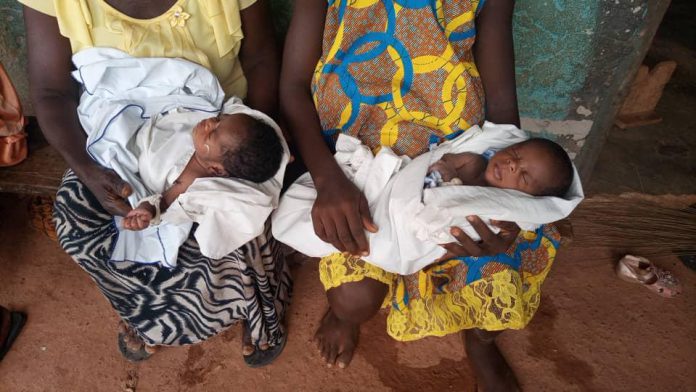 Four persons, including a retired midwife, allegedly involved in the stealing and sale of babies at Atuabo and Half Assin in the Western Region, have been nabbed by the National Investigative Bureau (NIB).

An Accra Circuit Court, on Tuesday, remanded the four into the custody of the NIB.

They have been variously held over abettement and hindrance to inquest.

They have all pleaded not guilty.

Chief Inspector Apiosornu, said the Police had received tip-offs, which would lead to the arrest of some more persons and vehemently opposed the grant of bail, saying it was premature.

The prosecution said one of the babies found was still on admission at the Police Hospital and that the accused persons could interfere with Investigations.

Mr Yaw Dankwah, who represented Nyamekeh, Bozoma and Cynthia Quashie, prayed for bail for his clients, saying they were not flight risk.

Mr Dankwah said remanding the accused persons was not founded in law, assuring that they would not interfere with investigations.

Mr Asamaney said his client had grown lean in the NIB custody and pleaded for them to be kept in the custody of the Police.

The Court, presided over by Mrs Evelyn Asamoah, said considering the fact that one of the children had died and the fact that another child was on admission, it could not grant the accused persons bail.

The Court, therefore, remanded them into the custody of the NIB to reappear on November 10.

It further directed the NIB to offer the accused persons access to their lawyers.

The prosecution said Sylvester Quarshie Nyamekeh, was arrested after he tried to offer a seven month baby boy for sale at GH¢80,000.00 at Atuabo to an undercover NIB personnel.

He said the Bureau’s Agent feigned interest in buying the sald victim and arrested him.

The prosecution, said Sylvester did all the negotiation on phone with the Agent and even sent recorded video of late Victim, Nhyira, a 10-day-old baby girl to show that he was into the business of baby selling.

Sylvester mentioned Beyejen, a retired midwife as his source, it said.

The prosecution, said investigations revealed that Bozoma and Cynthia Quarshie had been assisting Sylvester Quarshie Nyamekeh.

It said Bozoma and Cynthia Quashie had been keeping and taking care of the victims in their houses and later given to Sylvester Quarshie Nyamekeh for ‘disposal’.

According to the prosecutor, it was also established that the late victim Nhyira was with Ediemu Bozoma, Cynthia Quarshie and one Mr. Quarshie now at large, and that they claimed the victim, Nhyira, died whiles with them at home.

It said Bozoma, had informed Cynthia Beyejen of the death of Nhyira and Beyejen ordered Bozoma, Cynthia Quarshie and Mr. Quashie, now at large to bury Nhyira without reporting to any authority.