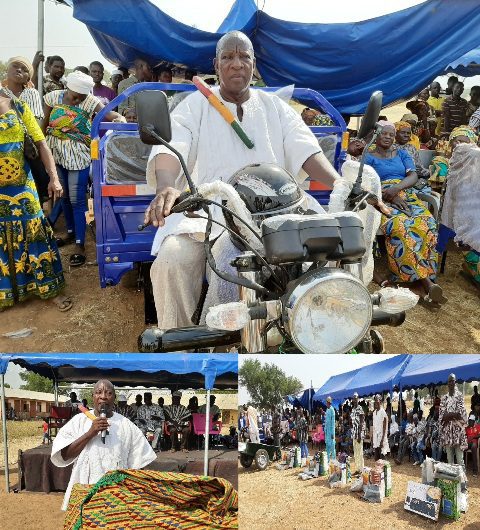 Mr Anthony Minyella, a retired teacher was on Friday adjudged the best farmer in the Talensi District of the Upper East Region, while 15 other farmers came up in the various categories of awards at the Farmers’ day celebration in Tongo.

Mr Minyella was awarded a tricycle, a pair of wellington boots, two cutlasses one knapsack sprayer and a certificate of honour.

The celebration was on the theme, “Enhancing small scale agriculture towards agribusiness development”, and attracted many people, farmers, Chiefs, school children and civil and public workers.

Addressing the gathering, Mr Minyella urged all farmers to work harder and not to be complacent with the high yields they harvested this year, “We should not relax but focus on producing more next year so that we will merit higher awards”.

He said a total of 1,089 farmers, comprising 505 males and 584 females benefitted from the project, while other farmers were supported with improved maize, soya beans and groundnut seeds, fertilizers, equipment for compost preparation, provision of extension services on sustainable agriculture practices and tree seedlings among others.

Mr Sulemana congratulated the farmers for their achievements and cooperation with his outfit, and urged them to go beyond the District to win Regional and National awards to uplift the name of the District.

The farmers exhibited various crops including rare ones such as plantain and cassava, which are cultivated in the valleys where the weather is cooler and soils retain moisture for long periods after rains.