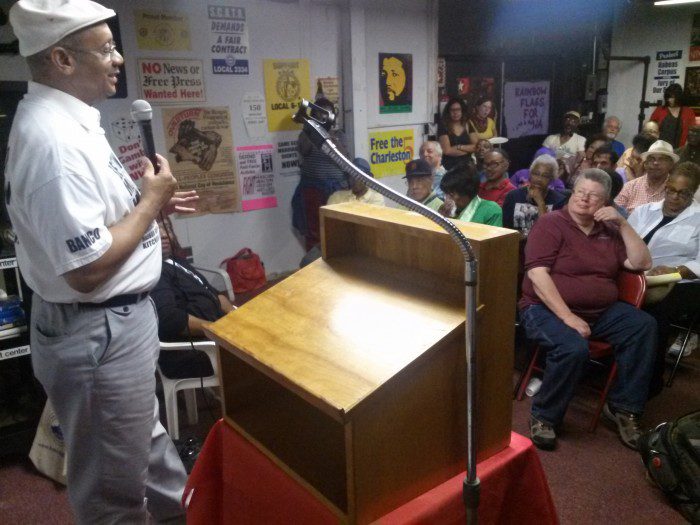 Rev. Edward Pinkney of the Benton Harbor/Berrien County Black Autonomy Network Community Organization (BANCO) spoke in Detroit at the invitation of the Moratorium NOW! Coalition and the Michigan Emergency Committee Against War & Injustice (MECAWI) at their weekly Monday night meeting on June 23.

Moratorium NOW! Coalition and MECAWI members have been heavily involved in the fight against the imposition of emergency management in Detroit and the forced bankruptcy of the municipality, the largest of such actions taken in the history of the United States. Benton Harbor recently emerged from emergency management yet the corporations and racist authorities in Berrien County are still disregarding the concerns of the African American community.

Several weeks ago both Moratorium NOW! Coalition and MECAWI passed a resolution calling for the dropping of criminal charges against Pinkney stemming from a recall campaign aimed at removing Benton Harbor Mayor James Hightower. A grassroots effort had collected enough valid signatures to hold an election that may have removed Hightower yet the vote was stayed after Pinkney was indicted on five felony and six misdemeanor charges by the Berrien County Prosecutor Michael Sepic.

A standing-room-only audience heard Pinkney at the June 23 meeting describe in detail the conditions facing residents of Benton Harbor, a city in southwest Michigan which has been severely affected by the institutionally racist policies of the corporate community. These racist practices are compounded by the impact of the economic crisis that has plagued Michigan for well over a decade.

Representatives of other organizations including the People?s Tribune newspaper, the local chapter of the National Action Network, Detroit Eviction Defense and many more attended.

Two former Detroit mayoral candidates Jean Vortkamp and Tom Barrow attended the meeting and spoke on the massive fraud they claim was committed in the Detroit 2013 municipal elections that resulted in a victory for Mike Duggan. Barrow had spearheaded efforts that successfully removed Duggan from the official ballot due to his violation of the residency rule that made him ineligible to run for mayor.

Later Duggan ran as a write-in candidate and was declared the victor in both the primary and general elections. Jean Vortkamp said she witnessed monumental duplications of signatures and other irregularities which were never investigated by the Detroit and Michigan state electoral commissions.

?These acts of fraud were never pursued,? Vortkamp said. Barrow echoed her sentiments raising questions about the legitimacy of the Duggan administration.

Duggan, the first white mayor in Detroit since 1974, was a resident of suburban Livonia until recently. He moved into Detroit in order to run for mayor and is closely allied with the corporate community and the emergency manager Kevyn Orr.

Prior to Rev. Pinkney?s address, announcements were made related to aspects of the struggle in Detroit including ongoing Freedom Friday demonstrations downtown, efforts to prevent the wholesale seizure of homes and land and the massive water shut-offs which has been condemned by the United Nations as being inhumane.

Like Detroit, Benton Harbor, has experienced a drastic decline in population directly related to predatory mortgage lending. A representative of the Moratorium NOW! Coalition reported that 237,000 people were driven out of the Detroit during the last national census period of 2000-2010. These households were subjected to racist predatory lending as well as the egregious municipal financial dealings that has taken billions of dollars out of the city and driven Detroit into financial ruin. In Benton Harbor, Rev. Pinkney reported that ?the population was down below 10,000 people from an earlier 45,000.? He noted ?like Detroit people were driven out through lack of jobs and home foreclosures.?

Whirpool Corporation is a major economic force in the southwest Michigan region. Most of the politicians appear to be working on behalf of big business and are subservient to the courts.

The Need to Build an Effective Defense

Rev. Pinkney in his address to the June 23 meeting said the case against him is totally fabricated. ?Berrien County is the only place in Michigan where you can be bound over for trial without any evidence,? he said.

?I attend the courts every day to monitor what is going on inside Berrien County. People are not receiving justice in these courtrooms,? Pinkney continued.

A trial on the five felony counts is scheduled to begin on July 21. Pinkney wants to file an appeal to the decision by presiding Judge Sterling Schrock to proceed with the trial due to lack of evidence.

If an appeal is not successful it would mean that the defense lawyer in the case, Atty. Tat Parrish, would be hard pressed to adequately prepare for the trial.

Resources are needed to purchase a copy of the court transcript from the evidentiary hearing. According to the testimony no one witnessed the defendant changing any of the petitions submitted to the Berrien County election office.

Absent of the criminal charges filed against Pinkney, the recall election against Mayor Hightower would have taken place in early May. Pinkney?s home was surrounded by local, county and state law-enforcement agents on April 24.

The BANCO leader was not at home at the time of the police siege of his residence. He later turned himself in the following day.

He was immediately placed on a tether, barred from using his computer and hosting his weekly radio program ?Pinkney to Pinkney.? He was prevented from exiting his home and garage for six weeks until after the June 6 decision of the Berrien County Court to move forward in prosecuting the case.

After having these draconian measures of house arrest removed Pinkney is continuing his organizing efforts in Berrien County. During the June 23 meeting in Detroit he asked that people would continue to support his defense campaign and to attend the trial if it is held in late July.

BANCO has initiated a Change.org petition against corruption in Berrien County and the removal of prosecutor Michael Sepic. The organization can be reached by writing to BANCO, 1940 Union Street, Benton Harbor, MI 49022. You can also log on to their website at bhbanco.org or e-mail banco9342@sbcglobal.net .