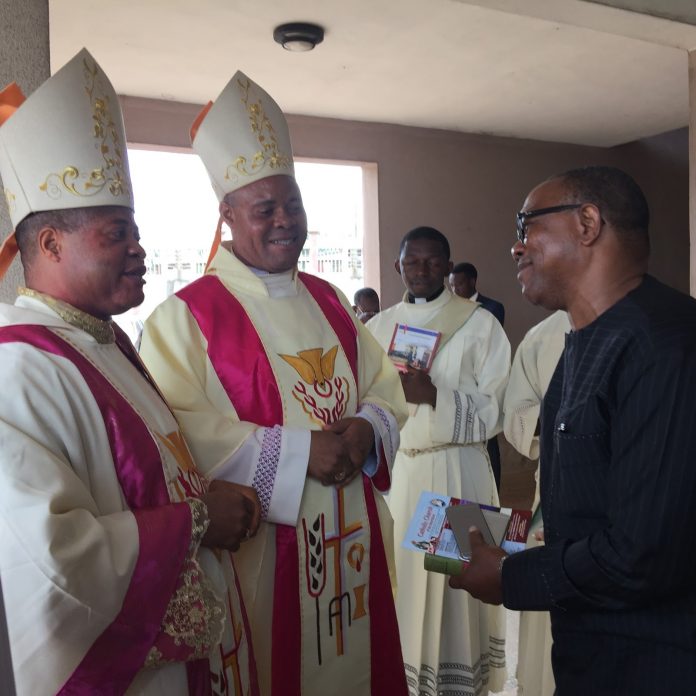 On December 7, 2012, Pope Benedict XVI appointed Monsignor Peter Okpalaeke of Awka Diocese in Anambra State, as the Bishop-elect of the Episcopal See of Ahiara Mbaise Diocese.

Fr. Okpalaeke is to replace His Lordship, beloved Late Most Rev. Dr. Victor .A. Chikwe, who passed away on the 16th of September, 2010. The clergy and laity of the Diocese have since rejected his posting and refused to give him, canonical possession of the Ahiara Diocese- a right it has according to the code of canon law (Can. 382 §1/382 §3), on the following grounds.

1. Due process was not followed. Ahiara Diocese rejects the violation of the canonical process (Can. 377 §2), that produced Bishop Okpalaeke. We want a Shepherd that will pass through the Gate of the Sheepfold and not one that climbs over elsewhere (John 10:1).

2. Ahiara Diocese detests nepotism in the selection of Bishops. It is unacceptable for Cardinal Francis Arinze to derail the code of canonical law, disqualify an entire presbyterium, in order to grab an additional episcopal see, for an Onitsha Ecclesiastical Province, that already has 8 bishops and 1 cardinal.

3. Neglect of Pastoral obligations as required by the code of canon law (Can. 383-400), since his appointment 5 years ago, is a clear sign that Bishop Okpalaeke and his representative Cardinal John Onaiyekan, appointed to administer the Diocese in his stead, do not care for the flock of God in Ahiara Diocese. We have been so starved of the Sacraments of Confirmation and Ordination; and all Pastoral obligations reserved to the Bishops. They have come to slaughter and destroy (John 10:10a).

4. A lot of polluted water has passed under the bridge in the Bishop Okpalaeke crisis, which has incapacitated him to efficiently administer the Diocese. He and Cardinal Onaiyekan have so intimidated the Diocese with the use of lies, military and police force to impose injustice on Ahiara. The code of canon law Can.401 § 2 states that “. A diocesan bishop who has become less able to fulfill his office because of ill health or some other grave cause is earnestly requested to present his resignation from office.”. Bishop Okpalaeke should immediately resign or be reassigned. He makes the flock to scatter and run away  (John 10:5). His name alone brings anger, fear and disaffection to the people.

5. Ahiara is not insisting on “Son of the Soil”, but on a Priest from Ahiara Diocesan Presbyterium as prescribed by the code of canon law (Can. 377 §2),.

6. Ahiara Diocese is not disobeying the Pope, rather we are helping him in reforming the Church, making sure that people do not commit ecclesiastical crimes in his name.

7. The grievances of the Diocese are strong, justified and deserve a fair hearing, by his Holiness Pope Francis, especially for the potential disruptive impact on evangelization work globally. it is worthy of note that Ahiara Diocese has, about 750 priests, who trace their origin to the Presbyterium,. Since the establishment of the Diocese in 1987, there have been at least 167 priestly ordinations for the Diocese. The Diocese is currently served by 127 priests and 113 religious, according to Vatican source. With such a wealth of priests, the Ahiara diocese has sent more than its share of missionaries around the world, and yes, has contributed to the universality of the church and sure can differentiate it from lawlessness.

On behalf of the Ahiara Diocese World-Wide Laity Council

About Ahiara Diocese World-Wide Laity Council: We are a global network of Catholics with roots and or relationship traceable to the Ahiara Diocese Presbyterium, of Nigeria, constituted to promote the social and pastoral health of our members and the Diocese, using all resources available to us globally.