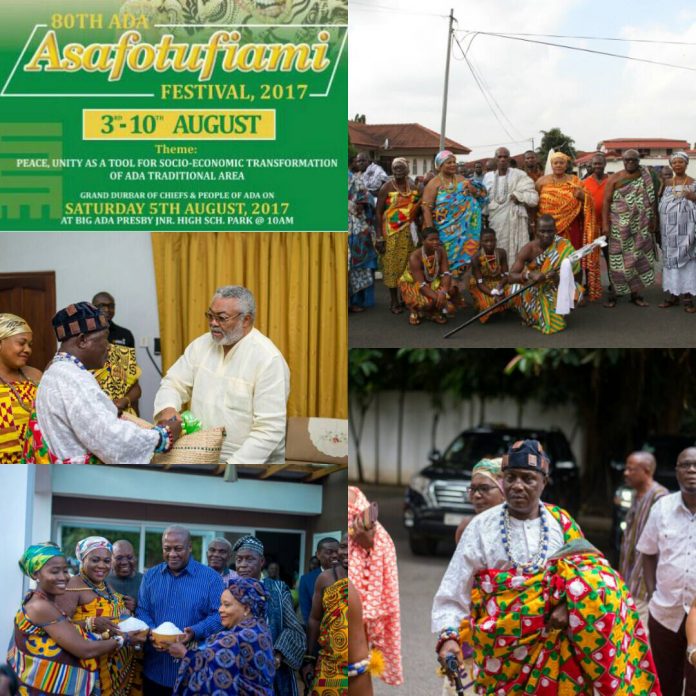 Finally the time is here.The biggest celebration of Ada culture and traditions is set to kick off on August 2, 2017 with a homecoming and bonfire night at the Aqua Safari Resort. The festival, which is in its 80th year of existence is one of the biggest festival in Ghana, attended by over 3 million people from all walks of life.

There will be amazing performances from some top artiste in Ghana to climax the week long celebration.

As part of the activities ahead of the celebration, the paramount chief of Ada traditional area, Djetse Abram Akuaku 111, led a delegation to Kumasi for Awukudae on an official invitation by Otumfour OseI Tutu 11.

The eminent personalities expressed their readiness to attend and participate fully in the festivities and congratulated the people of Ada on the milestone and assured them of their support.

This year’s Asafotufiami festival is to celebrate the 80th edition of the Asafotufiami Festival which also coincides with the 40th years of Djetse Akuaku’s reign on the Ada paramount stool. Activities such as a float, homecoming/bonfire night, a beauty pageant and a grand durbar will all feature as part of the anniversary.

The festival which is held during the first week of August every year allows the people of Ada to celebrate their Asafo companies and the ancient wars that they fought to protect themselves and their lands from foreign invasions of their lands.

In modern times, the festival has however, become a time for sons and daughters of Ada to come back home to take stock of issues that are hindering the development of the Area and make plans for the next year.

This year’s festival would be graced by His Excellency President Nana Addo Dankwa Akufo Addo, President of the Republic of Ghana, Former. President Jerry John Rawlings, Former. President John Dramani Mahama and Otumfuo Osei Tutu II the Asantehene. Dr. Daniel McKorley, the Executive Chairman of McDan Group will be the Chairman for the occasion.

Highlights of the Festival