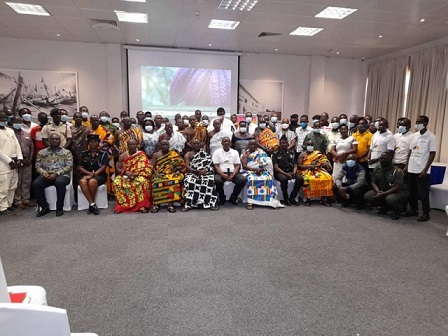 Discussants at a forum on Conservation and Restoration of forest resources have appealed to the government to reconsider amending the Forest Concession Act that gives concessioners authority to invade forest reserves and farms to exploit economic trees.

Rampant illegal practice as a result of the defective nature of the law, the participants said, militated against national efforts to end deforestation and reduce forest degradation.

The amendment when done will help protect forest resources and economically empower farmers. The discussants, therefore, appealed to the Ministry of Lands and Natural resources to suspend or terminate the Timber Resource Management Act, 1997 – Act 547 to safeguard the country’s forests.

The forum was organized in Cape Coast by Cocoa Forest Initiative (CFI), hosted by the Ministry of Land and Natural Resources in partnership with FC, COCOBOD and World Cocoa Foundation, and IDH Sustainable Trade Initiative.

Barima Siaw-Panin III, Denkyira Gyasihene, representative of the traditional authorities called for collaboration on the development and implementation of action plans that could help reduce cocoa-related deforestation and forest degradation, and forest restoration.

Outlining some achievements of CFI, Mr Vincent Awotwe-Pratt of World Cocoa Foundation (WCF), said it had succeeded in triggering a reform of the tree tenure and benefits sharing to enable farmers to register and claim a hundred percent ownership of trees they plant.

Additionally, it has succeeded in supplying over two million multi-purpose trees, and supported 41,890 out of envisaged 400,000 farmers they hope to support through Village Savings and Loans Association (VSLA) scheme.

Otumfuor Amoah Sasraku IV, Twifo-Hemang Omanhene, urged the people to see the protection of national forest cover as a moral and civic obligation for mutual and global gain.

He could not fathom what would happen if the national soil and forest cover and its resources were depleted.
He called for concerted efforts to drastically reduce the rapid rate of deforestation and environmental degradation.