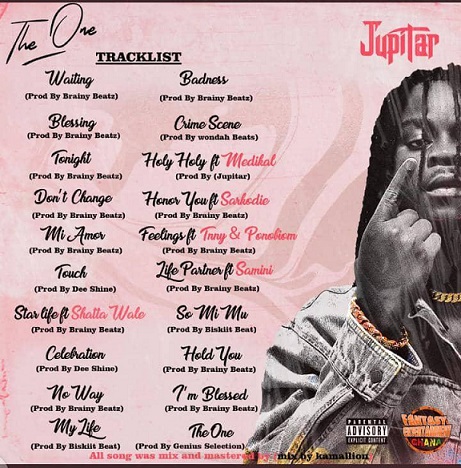 After few days of its release, Jupitar’s “The One” has dominated music reggae charts across various digital music platforms racking impressive streaming stats.

The multi-genre album is a compilation of some of Ghana’s best musical talents which includes Sarkodie, Shatta Wale, Medikal, Yaa Pono, Samini and Tinny.

Jupitar opens the 20-track album with an explosive Afrobeats tune “Waiting” as the music trailblazer puts his emotions on display as well as showcasing his diversity and ruthless dancehall vibes.

The “Star Life” track featuring Shatta Wale has undoubtedly been one of the breakout songs on the album and has received massive airplay over the past few days.

Both artistes on the track went on to talk about the hustle during the start of their careers and sharing their experiences but were able to overcome the difficulties and now live a “Star Life”.

Ghana’s rap icon Sarkodie also featured on the album and was ruthless on the “Honour You” track as he went emotional with his rap lyrics and a potential award-winning track.

The “Mi Amor” song on the album for instance has got a bit of Spanish fuse in it and this is what Jupitar had to say about it.

“Over the years, music is changing in diverse ways and it is up to every artiste to be dynamic and make enough to feed the various musical markets in the world,” he told GNA Entertainment.

Jupitar added that the album was a masterpiece that demonstrated his readiness for the international music markets as well as his versatility.

Award-winning rapper Medikal also featured on “Holy Holy” a song produced by Jupitar himself and looks a potential banger.

Jupitar closes the album with “The One” single as he remains hopeful that the album would cross borders and lift the flag of Ghana high.

The multiple award-winning artiste is currently on an album tour in the USA and he is expected to travel around Europe to promote his album later in the year.