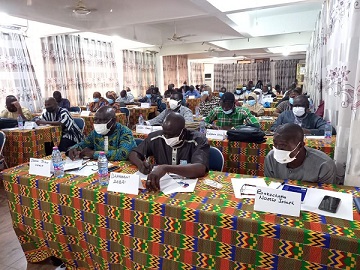 She said such education was vital as it would equip them with relevant information on how they could take proper care of themselves to prevent incidences such as teenage pregnancies, improper personal hygiene, child early and forced marriages, and child labour among others, in their communities.

She said this, in Tamale, when Norsaac, A non-governmental organisation engaged the Technical Teams of Northern and North East Regional Directorates of the Ghana Education Service (GES) to seek their inputs on ways to promote RHE among young people in the two regions.

The meeting formed part of phase four of Norsaac’s ISEP being implemented in the Northern and North East regions, with funding support from Axis.

The ISEP seeks to ensure young people have adequate knowledge on their sexual and reproductive health rights, which would help them to contribute actively in making decisions that affect their general wellbeing.

Madam Kandoh said the number of cases of teenage pregnancies recorded and related issues, based on information provided by the GES Directorates of the two regions were alarming, hence, it needed collective effort of all stakeholders to resolve.

A report which was presented during the meeting showed that as of May 2021, 324 cases of teenage pregnancies were recorded in schools in Saboba, Yendi, Gushegu, Kumbungu, Kpandai, and Zabzugu districts of the Northern Region.

In the North East Region, a total of 83 teenage pregnancies were recorded in schools at West Mamprusi, East Mamprusi, Chereponi, Bunkprugu-Nankpanduri, Mamprugu-Moagduri, and Yunyoo-Nasuan districts, as of May 2021.

Madam Kandoh, therefore, called on stakeholders in the educational sector to consciously integrate RHE content in schools’ syllabus to equip young people with age-appropriate knowledge on their sexual and reproductive health rights to help them make informed choices.

That, she said would aid young people to make inputs about their wellbeing to help contribute to reducing incidences of teenage pregnancies and accompanying effects in their personal development.

Some of the participants urged parents and guardians to take responsibility and build cordial relationships with their children, especially girls, to allow them freely make inputs on decisions that affect their wellbeing.