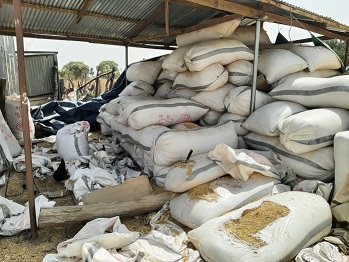 Rice farmers at Fumbisi and Tono in the Builsa South District and the Kassena-Nankana Municipality of the Upper East Region have attributed heavy losses on the farm to delay in harvesting due to the lack of combine harvesters.

The farmers said they could not harvest their produce on time, leading to the drying up of the rice in the valleys while some were destroyed by a bush fire.

Most of the farmers have packed the dried harvest in their houses as buyers prefer rice that still has some moisture in them and so want to take advantage of the situation to buy the rice at cheaper prices.

Rice processors prefer that which still has some moisture as the result looks nicer than when it is dried and brittle.

Mr James Adawina, a Commercial Farmer at Uwasi in the Builsa South District, who showed the Ghana News Agency (GNA) around his house where he packed several bags of dried rice, said he could not get buyers for the produce.

“I have to pack this rice at my house because I had no place to keep them. I have to even evict some tenants to keep the rice. This is a challenge to us the farmers,” he said.

Mr Adawina indicated that the 170-kilogram bag of rice was sold at Ghc300.00 at Tono while the same bag went for Ghc250.00 at Fumbisi.

He emphasized that the lack of combine harvesters was a major challenge they faced as farmers and the longer the ripe rice stayed on the fields the more it was exposed to the annual harmattan bush fires.

“Fire razed some people’s farms at Uwasi and the other challenge is that there is no warehouse here to store our produce.

“For now the women are not willing to buy unless I keep the rice until the rainy season when I can get a good price. The lack of combine harvesters is a big challenge to us farmers.”

Mr Adawina, who is also the Chairman of the Tono Irrigation Cooperative Farmers Union, appealed to government to support them with combine harvesters, saying “If my rice was harvested in time, I would have easily sold it at the Ghc250.00 price for the 170kg per bag.”

He lauded the former Minister of Food and Agriculture, Dr Owusu Afriyie Akoto, now Minister-designate for the sector, for his concerns for the plight of farmers.

Mr Richard Akoka, a Rice Farmer at the Fumbisi rice valleys, who shared the same experience, said “Farmers could not get combine harvesters to harvest their produce so the rice over dried on the fields. Fire even burnt some.”

He said there was market for their produce this year unlike previous years, provided the ripe rice was harvested early when it still had some moisture in it.

When the GNA contacted Mr Sylvan Dauda Danaa, the Builsa South District Director of the Ministry of Food and Agriculture (MoFA), he confirmed that some farms were burnt, but some of the farmers were able to harvest their rice early and got good market.

He said some farmers were not willing to sell their rice, but stored them in anticipation of future high prices.

“We gave them inputs and what I am foreseeing is that they don’t want to pay back but we have to recover those monies from them.

“Those whose farms were affected by the fire, we are yet to meet them to see how we can help them. We may still give them some time to pay back.”

At Tono, Mr Robert Kwame Abokah, a farmer, told the GNA that land preparation, harvesting equipment, and market for their rice were major challenges to farmers in the area.

“For now, we can’t negotiate for our own price, what the market gives us is what we take. Some years ago, we met some buyers, negotiated prices with them and they came and bought, but after that they didn’t come again.

“We even met Avnash Industries Ghana Limited and they also came in, but their problem is that they offer low prices which are not good for our quality rice,” he said.