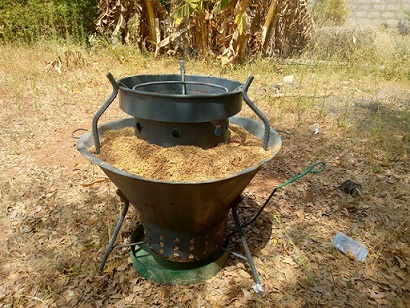 A Canadian non-governmental organization, SOCODEVI under its project dubbed ‘PROCED’, has procured over 500 rice parboiling stoves to be donated to women undertaking rice processing in its project areas in the Upper East Region.

This comes after the organization partnered rice par-boilers in the region to form a Cooperative, to roll out an improved, but simple and cost effective technology for rice par-boiling.

The cooperative dubbed “BBN Cooperative” is made up of about 1,409 women rice par-boilers drawn from 59 Farmer-Based Organizations (FBOs) in three districts, Bolgatanga Municipality, Bawku district and Navrongo districts (BBN) in the region.

Speaking in an interview with the Ghana News Agency, Mr Raphael Asuure, the Cooperative Advisor for PROCED project, said the project since its launch, had built the capacity of the women on simple technological ways to hygienically parboil rice.

He said the beneficiaries had in the pilot phase in December last year successfully produced some of the improved parboiled rice after they were trained on how to process it.

“The end product comes out well and does not lose its nutritional value”, he added. He was optimistic that the newly procured but yet to be distributed stoves, would help the women to process paddy rice in larger quantities to satisfy the public and more specifically for those who have interest in locally produced rice.

Mr Asuure said the Cooperatives generally contributed to the improvement of living standards of women globally while providing essential infrastructure in areas that were being neglected by governments and investor-driven enterprises.

He said the PROCED project, which was expected to last for five years would partner the BBN Cooperative to focus its efforts on the sustainability of the economic operations of processing paddy rice and packaging it to be marketed in all cities across Ghana.

The stove uses rice hull as fuel and it is noted to be faster and more efficient and hygienic than the local stoves.

It is used by placing a pot of water on it to boil before rinsed paddy rice is then put into a perforated metal basin and placed on top of the pot, well covered, to allow steam to parboil it.