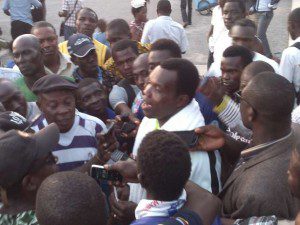 Accra Great Olympics chief Oloboi Commodore escaped lynching by irate fans of the club after veteran goalkeeper intervened to calm the supporters who are angry over their struggling status.

The General Manager has been blamed by the fans for the woes of the Wonder Club who are languishing in the relegation zone after losing two matches in a row.

Oloboi was nearly lynched by the fans as they attacked his car following Wednesday?s 3-2 home defeat to Asante Kotoko which has led growing calls for him to resign.

The ugly scenes were calmed when veteran goalkeeper Richard Kingston approached the irate fans to assure than they will do everything to improve the fortunes of the Accra based side.

?I understand your pain because losing two important games within the space of 4 days is very painful but all I have to say is for you [supporters] to calm down, trying to destroy property will not help,? Kingston told the fans when he intervened to calm nerves.

?The playing body and the technical team will do everything possible to put smiles on your faces, Great Olympics is a club that we are all serving and what we need from you the fans is unconditional support.

?Let us all come together and fight for a common goal which is helping the team to survive in the league because there are 12 games more to be played and I strongly believe with your support we can make it?.

Great Olympics are currently 15th in the 16-team league with 19 points from 18 matches and must win their subsequent games to avoid dropping to the second tier.