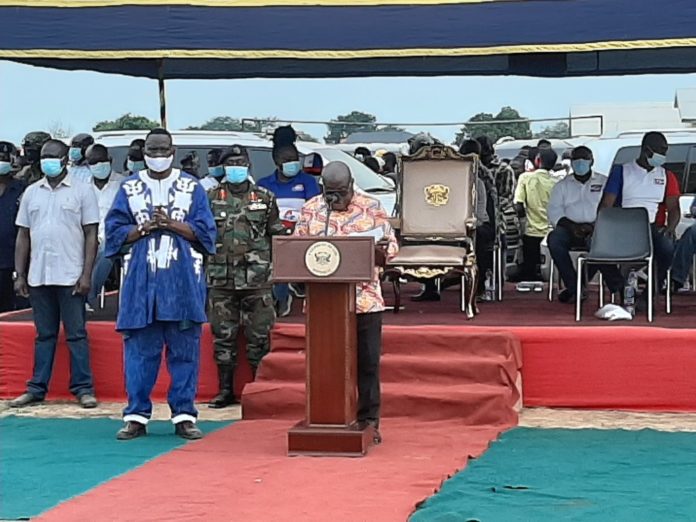 President Nana Addo Dankwa Akufo-Addo has called on the people of the Upper East Region to cast their votes in favour of the New Patriotic Party (NPP) in the December 7, 2020 election for development and progress.

He said the voting trend in the Region since 1992 had always been in favour of the National Democratic Congress and urged electorates in the Region to change their voting pattern towards the NPP.

“The Upper East Region is one of the Regions that is very biased towards the NPP. Ever since we started voting in 1992, no NPP Presidential candidate has ever won the majority of the votes in the Region.”

President Akufo-Addo made the call when he addressed a durbar of Chiefs and people of Zebilla constituency in the Upper East Region as part of activities to mark the first day of his two-day working visit to the Region.

He said “The time has come to change the equation. Let us now move with the elephant, let the people of the Upper East region come and sit on the back of the elephant and enjoy the progress.”

He noted that the NPP had three out of 15 seats in the Region, and said “The time has come for a change in the Upper East Region. For the 25 years that some people have been in charge of the Upper East Region, we have not seen the work they have done in this area to change the lives of the people.”

According to the President, in the three and half years of the NPP in government, the people of the Region were witnessing the changes that were taking place in the region and across the country.

He reiterated that “The time has come for the Upper East to ride on the back of the elephant so we can move together, and that means that, there is going to be four more for Nana, and four more for Frank Fuseini Adongo.”

Mr Kwasi Amoako-Atta, the Minister of Roads and Highways, said the government was working hard on all roads across the country and the Upper East Region was not left out.

He said the Region has had its “adequate share of this great improvement that is seen in the road sector. You are witnesses to the massive work going on the Bolgatanga-Bawku-Pulmakum road covering almost a distance of 116 kilometres.”

Mr Amoako-Atta gave the assurance that substantial completion would be achieved by the end of the year, and said 50 kilometres of the road was completed and ready to be commissioned, adding that, by the end of November, they would add 30 more kilometres of roads.

He noted that the remaining 26 kilometres road was under construction including three bridges along the Bolgatanga-Bawku-Pulmakum road.

The Region has a total of 3,800 kilometres road network of with about 100 road construction projects were ongoing simultaneously across the Region, while 26 projects were under procurement, he said.

Naba Moses Apiiah Abaare, the Chief of Binaba, on behalf of Chiefs in the area, commended the President for his “visionary leadership, we are so grateful for your good governance so far, and we are so happy that your government is so inclusive.”

He prayed for long life for the President and thanked him for the Free Senior High School policy initiative.