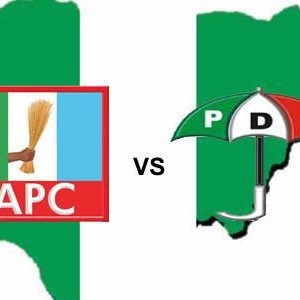 ?Says REC Khan, Wike and PDP should be held responsible

The Rivers State Head Office of the Independent National Electoral Commission (INEC) located at Aba Road in Port Harcourt is in danger of being burnt down for political reasons, the State Chapter of the All Progressives Congress (APC) has warned. The party in a statement by its Chairman, Dr. Davies Ibiamu Ikanya, said it was tipped off about the impending arson by a patriotic member of the political family of Chief Nyesome Wike, the State Leader and gubernatorial candidate of the Peoples Democratic Party (PDP). ?An informant in Chief Nyesome Wike?s camp has just alerted us that the PDP leadership in Rivers State has concluded arrangements with the INEC Resident Electoral Commissioner, Mrs. Gesila Khan, to burn the INEC Office at Aba Road by 2am on 15th April, 2015 in order to destroy all the forged documents relating to the announcement of the fake results of the Presidential and National Assembly elections of March 28th and the Gubernatorial and State Assembly elections purported to have being held in Rivers State on April 11th, 2015,? Dr Ikanya said.

He also said in the statement issued in Port Harcourt: ?We continue to maintain that there was no election in Rivers State and that the announcement of Chief Wike and his cohorts as winners of election will not stand the test of time. We are, therefore, not overly surprised by this diabolical plot to destroy the evidence of their electoral theft but we wish to warn that burning of INEC office by these misguided elements will not save them from facing the wrath of God and the wrath of Rivers State people when these elections are rescheduled. The blood of innocent Rivers people wasted because of the struggle for power by PDP?s evil crowd will never go un-avenged.?

The arson plot becomes imperative as the only way out of the mess that INEC has finds itself as the possibility of cooking up or supporting the over one million votes said to have being won by Chief Wike is becoming difficult to manipulate as both the eggs heads of both Chief Wike?s Camp and the INEC officials are at their wit-ends on how to achieve this bogus figure allotted to a fellow who can?t boast of up to 50,000 votes in a fair and unbiased election in Rivers State. To worsen their situation, Prof Jega has ordered that both the Card readers and the ballot papers allegedly used in the funny election should be moved to INEC Abuja for study and downloading. This is contrary to the plot by the State REC to burn the Card Readers together with the ballot papers before the demand of Prof Jega hit them like a rocket. With the successful movement of the Card Readers to Abuja, she is still retaining the Ballot papers insisting that she will be the one to take them to Abuja with the idea that the INEC office would have being bombed or burnt before Thursday when she is billed to travel to Abuja.

The Card Readers contrary to the INEC directive was never used in the alleged election in Rivers State.

Rivers APC called on the police and other security organs to act fast to prevent the actualisation of the sinister plot to burn down the State INEC Office.

?In any case, the intended arson will not save Wike, PDP and Mrs. Khan as we have enough video and documentary evidence to prove that these undemocratic minds do not mean well for Rivets people. Indeed, we shall do everything within the ambit of the law to ensure that these undemocratic elements do not come anywhere close to the seat of power as their plot to loot and share our common patrimony among themselves to the detriment of the future of our State will not see the light of the day,? the party said.

The party therefore warns those celebrating the killings of innocent Rivers State people and stolen mandate to stop deceiving themselves as they will have nothing to celebrate in matter of few weeks.

It commended Nobel laureate, Prof. Wole Soyinka, the USA Ambassador, Mr. James Entwistle, the European Union Electoral Observers, Coalition of Civil Society and the international observers who worked in Rivers State for condemning the sham in River State which PDP and INEC are struggling in vain to convince the world to accept as elections.