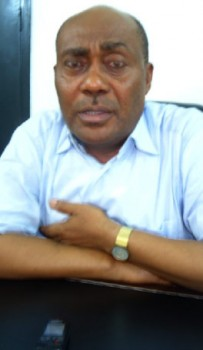 The Rivers State Chapter of the All Progressives Congress (APC) has alleged an assassination attempt on the State Governor, Rt. Hon. Chibuike Amaechi. Rivers APC Chairman, Dr. Davies Ibiamu Ikanya, said that the attempt took place on Thursday at the Rumuolumeni area of Port Harcourt, the State capital. The attempt to kill Amaechi was made by some unidentified gun-wielding youths who had first blocked the exit route of the governor?s convoy. As the suspected killers advanced to where Amaechi was addressing supporters of All Progressives Congress, APC, where he had gone for the final leg of the part?s door-to-door campaign in Obio/Akpor, the governor?s security details returned fire. Amaechi was shielded by his security personnel to safety. He, however, was not hurt. Unconfirmed reports stated that a certain number of men have been allegedly commissioned to kill Amaechi on Saturday in Ubima, Ikwerre local government when he shall visit to cast his vote during the March 28 Presidential election.

According to sources in Ubima, which is Amaechi?s hometown, some strange faces had been sighted doing a reconnaissance of Ubima. Amaechi is the Director-General of Buhari Presidential Campaign Organisation.

?All the same, we thank God for his divine intervention, if not, the story would have been different,? Ikanya said in a statement. He said that Gov. Amaechi?s ordeal was far from being over as arrangement have been concluded to attack him anywhere he maybe sighted in Port Harcourt before 28th March, 2015. ?To add to our travails, the Port Harcourt residence of our gubernatorial candidate, Dr. Dakuku Peterside, has been cordoned off while 35 APC leaders have been arrested in the past 24 hours for no just cause,? Ikanya stated.
He blamed the State Chapter of the Peoples Democratic Party (PDP) of working in concert with the police on what is code-named ?Operation Holocaust? which started on Thursday and would involve a house-to-house attack on APC members in Rivers.

?The non-indigenes have already been forced to flee the State,? he said, adding: ?By Friday they will go for Ojukaye Flag-Amachree, the Asari Toru LGA CTC Chairman, attempting to murder him with other APC leaders in Asari-Toru and Akuku-Toru. After that they will invade the home of Chief Victor Giadom, the Director General of APC Campaign Organisation, at Gokana, to arrest him with Senator Magnus Abe and Hon. Barika. The following people have been listed to be attacked: Udi Odun in Abua, Cassidy Ikegbedi in Ahoada, Allwell Oneyeroh in Etche, Nnamdi Okere in Oke-Etche.

?Facts available to us shows that shooting is currently going on in Okirika in a test run of some of the ammunition imported for this purpose as warlord Ateke Tom celebrates the assemblage of over 2,000 armed ex-militants to ensure that election does not hold in Rivers State, apart from illegal polling units so designated by INEC where only PDP members will be allowed to thumb-print and results announced accordingly.?

Ikanya in the statement dismissed as ridiculous, the rumour making the rounds that he has defected to PDP. ?That will never happen. Whoever started or is spreading that lie should be treated for acute malaria,? he said.

He disclosed that the rumour came to his attention while he was chairing a meeting of APC stakeholders with Governor Amaechi in the Government House. ?Let me state emphatically that should everybody decide to dump APC today, I, Dr. Davies Ibiamu Ikanya, will be the last person to dump the party because I am a man of principles. You can be rest assured of this,? he said.

The Rivers APC Chairman dismissed the rumour as the handiwork of the Rivers PDP. He said: ?Last Monday, Mr. Felix Obuah, the PDP State Chairman while receiving the defected Deputy Governor, Engr Tele Ikuru, boasted that about six commissioners in Gov. Amaechi?s cabinet would be joining them by Wednesday ? that is, two days ago. If I may ask, where are the commissioners that have joined them? Of course, only a Judas Iscariot can join them. In every given time only one Judas exists and he has already departed, thereby leaving APC more virile, united and stronger.