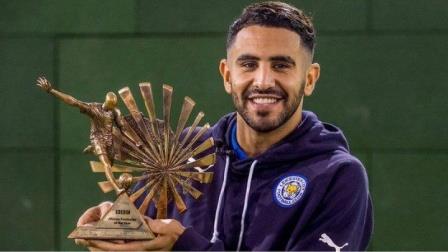 Riyad Mahrez has been crowned the BBC African Footballer of the Year 2016.

Fans from across the world voted for the Algeria and Leicester midfielder ahead of Pierre-Emerick Aubameyang, Andre Ayew, Sadio Mane and Yaya Toure. 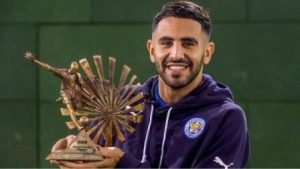 Winger Mahrez, 25, told BBC Sport: “It means a lot, it’s something big for African players so I am very happy, I am very proud.

“It’s always good to receive awards and for African players it’s a huge honour. To all the fans, thank you very much.”

He added: “Also I want to thank the Algeria fans and dedicate this to them as well and for my family.

“I just have to carry on and keep going with my football and see what I can do.”

The award caps an exceptional year for Mahrez, who had already won the English Premier League title and was voted Professional Footballers’ Association Player of the Year.

It is further recognition for his outstanding form as Mahrez, whose family comes from the small town of El Khemis in Algeria, took the Premier League by storm.

He was a driving force in Leicester City’s shock title triumph, scoring 17 goals and providing 11 assists as the Foxes pulled off what had been a 5,000-1 shot before the season.

Leicester manager Claudio Ranieiri was in attendance as Mahrez received his award and paid tribute to the winger.
“I want to see him continue as a fantastic player,” the Italian told BBC Sport. ” It’s very important for us, for the team. He is improving every day.

In May, Mahrez became the first African to be voted the best player in the league by his fellow professionals, only two years after he had joined Leicester from Le Havre for £400,000.

Mahrez has made a remarkable rise from playing street football as a youngster to shining in the company of some of the world’s best footballers.

In 2016 he proved he can thrive at the highest level, scoring four goals in his first five games in the Champions League.

He has also excelled on the international stage. In five matches for Algeria he scored two goals and provided five assists, and helped them qualify for next month’s Africa Cup of Nations.

His achievements have also been recognised by football’s world governing body Fifa, who included him on its shortlist for Player of the Year – the only African among the 23 names.

Mahrez now joins a list of greats, including Abedi Pele, George Weah, Jay-Jay Okocha and Didier Drogba, to have won the BBC African Footballer of the year award.