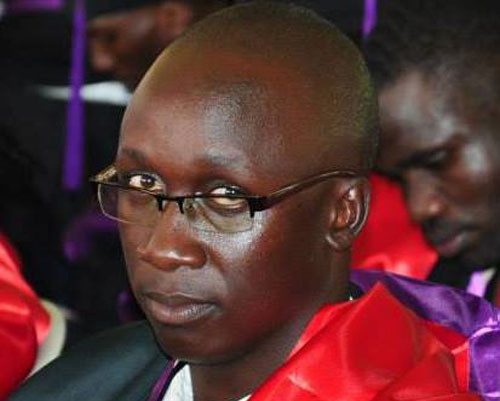 Pius Opae Papa pictured on the day of his graduation at UCU in 2013. (Photo: courtesy)

Traveling on a motorcycle, Pius Opae Papa, 28, was knocked down by the speeding truck at Ofinya trading centre along the Tororo-Malaba highway.

The journalist, destined for home, broke his left leg in the process while the rider survived unscathed – as the trailer hit the motorcycle from behind.

The actual cause of the accident has not been established yet, but initial comments by police point to overspeeding on the part of the trailer driver.

Opae later succumbed to internal bleeding inside the casualty ward at Tororo Hospital where he was admitted after the crash.

At the time of his death, he was under the care of Dr Tom Ochar at the health facility.

A few hours before the accident, Opae is understood to have visited his former workplace – Rock Mambo Radio – where he reportedly spent some lively two hours with his former workmates.

He did not know that his fateful end was near.

Opae has also been the editor of the Uganda Christian University Mukono Magazine.

He graduated from this very university (UCU) in 2013 with a bachelor’s degree in mass communication.

The youthful scribe first worked as a reporter at Rock Mambo Radio in Tororo after completing his internship there in 2012.

He later joined Monitor newspaper as a Tororo correspondent following the death of senior reporter John Augustine Emojong, before crossing over to the Observer newspaper.

Opae was the son of Eunice Among, the headteacher of Victory Border Point Nursery and Primary School Malaba.

He will be laid to rest at his village home in Koitangiro, Malaba town council, Tororo South County in Tororo district.

Meanwhile, police has arrested the driver of the trailer as well as the rider of the motorcycle as investigations into the accident continue.

By Faustine Odeke, The New Vision