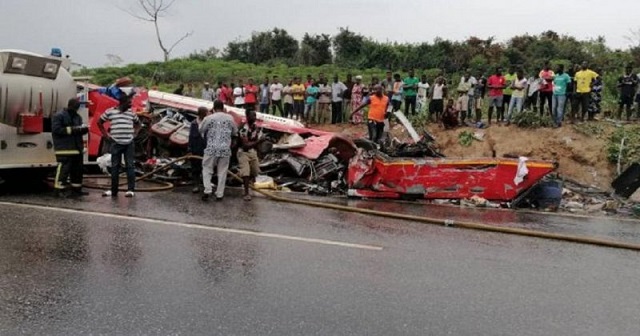 Some road accidents left tears in the eyes of Ghanaians and ‘unforgettable prints’ in their hearts and memories in the year 2020.

Ghana News Agency sampled a number of such stories to raise awareness on road safety on the eve of the New Year, 2021.

The early days of the year 2020 was welcomed with a road crash killing over 30 persons on Tuesday January 14, at Komenda in the Central Region.

The crash involved two buses traveling on the Accra-Takoradi road.

On Monday, March 9, 2020, 35 people, including women and children were killed when two buses collided in the Bono-East Region near Kintampo, about 430km (270 miles) from Accra, leaving six people in critical condition.

Residents around Adetsewui Junction near Nyorgbortey in the Akatsi South District of the Volta region in the middle of the year received their share of road crashes when four persons were reported to have died in a gory motor accident on the Akatsi-Tadzewu road on Monday June 8.

Six families and the entire nation shed tears when six teenage footballers were killed and 30 others injured in a road accident in the Ashanti Region on Saturday, September 19.

It was reported that the accident occurred when the footballers aged 12-15, were on their way back from Afrancho, a community in the Region, after a football match.

On Sunday, November 29, 60 passengers on a Metro Mass Transit Bus got involved in an accident on the bridge over River Supon at Osenase on the Asamankese-Kade road, leading to the death of one passenger with 22 others sustaining various degrees of injuries.

A day to the end of the year, Wednesday, December 30, the death was reported of three persons who died on the spot after two long trucks collided at Osino on the Accra-Kumasi highway at dawn.

According to provisional data compiled by the Motor Traffic and Transport Department (MTTD) of the Ghana Police Service, road crashes claimed 2,310 lives by November 2020.

The National Road Safety Commission said the nation loses over $230 million annually due to road crashes and that within the last 28 years, over 46,000 Ghanaians had been killed in road accidents nationwide.

The Commission said over-speeding on the part of drivers remained the leading causes of road crashes in recent times.