Seven Hundred and Eighty Nine (789) road traffic accidents were recorded in the Central Region (C/R) from January 1st to 31st December, 2016 against 728 during the same period in 2015. 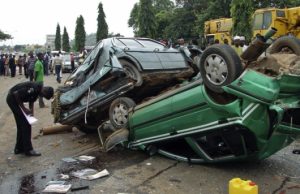 Mr. Stephen Anokyi, Central Regional Road Safety Commission, disclosed this in an interview with Ghana News Agency at Cape Coast at the week-end.

Mr. Anokyi said roads that were construction as very assessable for free movements of goods and services have now turn-out to be death traps and has out-lived its importance, recording accidents with death day in and day out.

Many road accidents, Mr Anokyi said, were mainly due to human errors, characterized by drinking, over speeding, fatigue driving, failing to observe road safety signs and rules and regulations.

“I am therefore advocating for all players in the road transport industry to sit-up to look out for how they can manage over speeding which is the number contributor of accidents, since it is a national canker,” he said.

He said people on board vehicles should also caution drivers when they fail to observe road traffic rules and should not hesitate to report such drivers to the police.

The Central Regional Road Safety Manager also called for installation of speed limiters in vehicles especially in Sprinter buses which are often involved in accidents killing a large number of people every year.

According to him, speaking on mobile phone whilst driving was also a big challenge and was a major cause of road accidents and the practice needed to be curbed.

He said the Road Safety Commission would from the next two months impose spot fines on drivers who committed road traffic offences and added that cameras would also be fixed on the highways and other vantages points on the road to capture offender of the law in order to bring them to book.