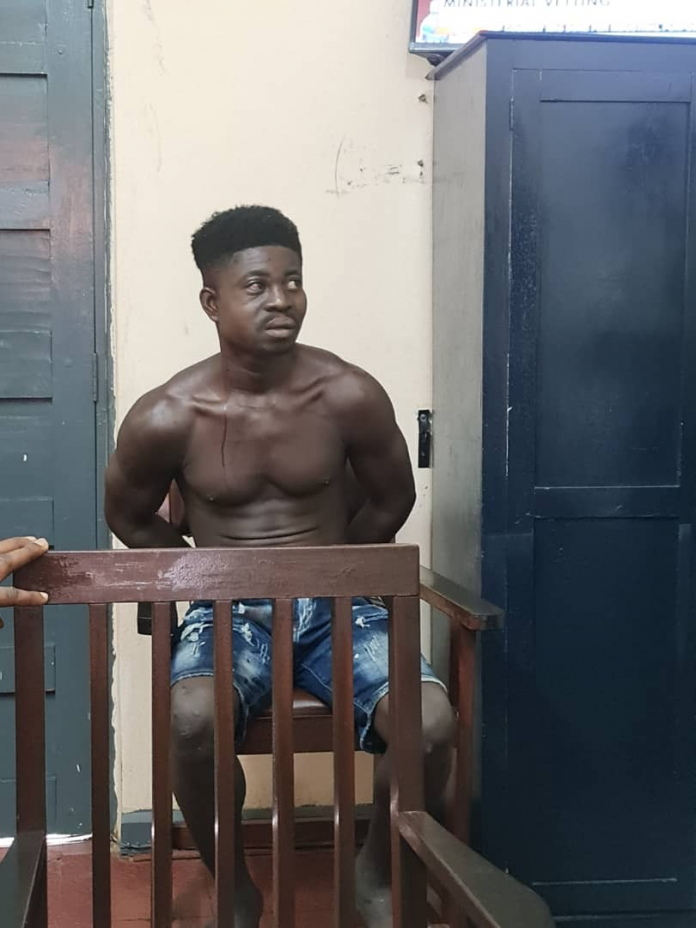 Prince Adu, a.k.a Dracula, 27, a notorious armed robber and an ex-convict has been caged again for 39 years imprisonment in hard labour for robbery and rape.

Dracula, who was involved in two different robberies in the Ho Municipality and was charged for robbery, pleaded guilty and was convicted on his plea.

The Court sentenced him to 21 and 18 years for the two robbery incidents, totally, 39 years with the sentences to run concurrently.

Prosecuting, Chief Inspector Stephen Atidzon told the Court presided over by Mr Felix Datsomor that, Dracula attacked an Immigration officer around KK House traffic light when he was traveling to Accra for duties and threatening him with a dummy corked gun on February 18, this year.

Prosecution said the officer then reported the incident to the Police and upon intelligence, Dracula was arrested on the same day by the Ho District Police at his hideout at Bentotal, Ho.

He said an amount of GH¢392.00 was found on him, and all the items belonging to the Immigration officer were also retrieved from his room.

Chief Inspector Atidzon said a dummy corked gun, two jack knives and the dress the convict used to commit the crime were also found in his room.

Prosecution said in his investigation cautioned statement, he admitted committing the crime and pleaded for leniency.

Prosecuting Dracula’s second offence, Police Inspector Patience Kuade, narrated that complainants (names withheld) are students of the Ho Technical University and are roommates at Queens Hostel, near the school.

She said the convict and his accomplice, one Emmanuel Courage Banitsi, already jailed for 33 years imprisonment, armed with machetes and crowbar broke into the room of the complainants at 0200 hours, while they were asleep and took them hostage at about 0200 hours on October 12, 2019.

Inspector Kuade said the convicts ordered the victims not to shout or get killed, which they complied.

The prosecution said the convicts then told the complainants to hand over their belongings and also disclose the pin codes of their mobile money accounts.

Inspector Kuade said the convicts after succeeding in collecting the belongings of the complainants and having access to their mobile money accounts, went on to forcibly had sex with them.

She said the case was reported to the Police and the victims were issued medical report forms to attend hospital.

Prosecution said about 0400 hours on the same night, the convicts went to a mobile money merchant, who is a witness in the case, to withdraw GH¢80.00 from one of the complainants account.

She said with assistance of the mobile money merchant, Emmanuel Courage Banitsi was arrested on October 18, 2019, where he confessed to conspiring with Dracula to commit the crime and was convicted accordingly.

Inspector Kuade said Police upon intelligence arrested Dracula from his hideout on February 18.

Four to serve 65 years for robbery

One arrested over murder of Kasoa businessman