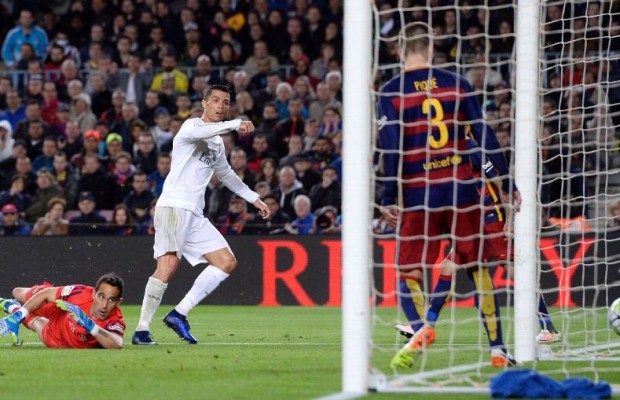 Gerard Pique had given Barca the lead before Karim Benzema answered for Real, and though Sergio Ramos was sent off, Ronaldo found the winner soon afterwards.

Barcelona’s lead in the Primera Division was trimmed to six points over Atletico Madrid, who won earlier in the day, while third-placed Real Madrid closed the gap behind Barca to seven points.

Madrid’s first win at Barcelona since 2013 was also the Blaugrana‘s first defeat since Oct. 3, ending their Spanish record streak after 39 games without a loss, four shy of Juventus’ record streak among the top five European leagues.

Barcelona had a glorious chance to take the lead in the 10th minute when Neymar fed an open Luis Suarez, but the Uruguayan could not get his feet right and the ball fell wide of the goal.

Real Madrid responded as Gareth Bale raced into the box from the wing and tried to square for a teammate but the play was picked out by a sliding Pique.

But the hosts had more opportunities in the first half, as Andres Iniesta had a powerful shot blocked in front.

As Barca kept up the pressure, Real defender Dani Carvajal was booked for stopping an attack and Lionel Messi’s free kick flew over the bar.

Ivan Rakitic then forced a save from Keylor Navas before Neymar shot well high after a series of fine passes with Messi.

The first major talking point came in the 24th minute when Ramos collided with Messi at the top of the box, but referee Alejandro Hernandez waved away Barcelona’s penalty shouts.

Ramos had already been booked for a foul in the buildup to Suarez’s opening chance, but Hernandez ruled he got the slightest of touches on the ball as Messi took him on.

Real then had some chances of their own as Ronaldo got off a soft shot and Bale fired a shot high.

And the visitors were on the ascendancy after Suarez received a yellow card when his hand flailed in the face of Pepe.

Ronaldo sent a free kick over the bar from 30 yards on the half-hour mark, and before the break Benzema found himself alone in the centre of the box, but he could not bring the ball down after the pass to him took a high bounce.

As the second half began, Ramos was again fortunate to escape a second yellow card for a foul on Suarez.

Barcelona regained their form and Navas made a spectacular save to deny Messi’s chip in the 55th minute, but the breakthrough came moments later.

But Real Madrid were back level seven minutes later as Toni Kroos’ pass from the wing took a deflection that lofted it high in the air, and Benzema scored from an acrobatic play.

And Zinedine Zidane thought his team had taken the lead from Gareth Bale’s header in the 79th minute, but the goal was harshly ruled out as the referee adjudged the Welshman had pushed Jordi Alba while leaping for the ball.

Ramos was sent off in the 84th minute for going into the back of Suarez, giving Barcelona hope they could find a winner.

But Ronaldo silenced the Camp Nou crowd a scant minute later after he controlled Bale’s lofted cross, allowed Dani Alves to pass him by and finished through Claudio Bravo’s legs.