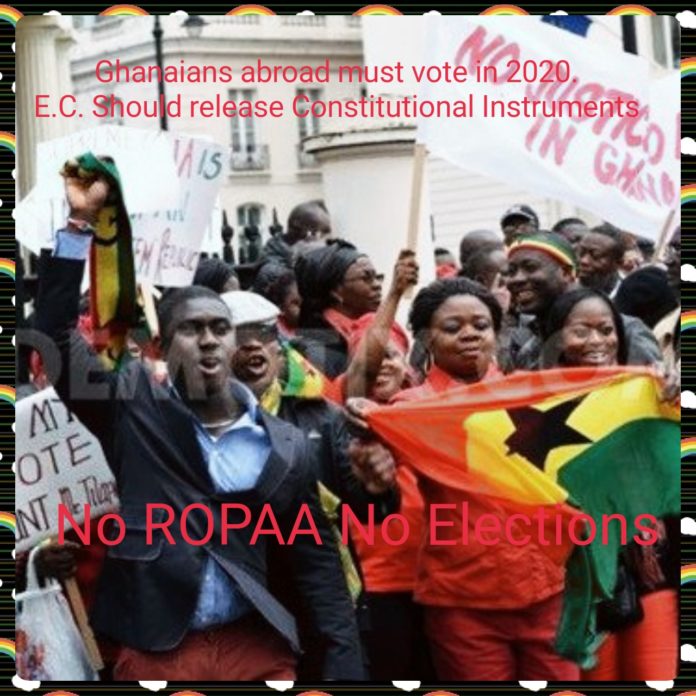 Daasebre Dr Amankona Diawuo, the Paramount Chief of Berekum in the Bono Region, said this during a regional stakeholders’ engagement meeting on the ROPAA held on Tuesday in Sunyani.

Though Parliament passed the Act 699 in 2006 to extend the right to vote in public elections and referenda to Ghanaian citizens living abroad, its implementation has since delayed due to some challenges.

The Act charged on the EC with the responsibility to make regulations for the implementation of ROPAA and in complying with the obligation of the Act, the commission set up a sub-committee to make recommendations on how best it could be implemented.

The nine-member Committee is currently undertaking a nationwide stakeholders engagements to sensitise the people on ROPAA, collate their views and opinions to facilitate smooth implementation of the Act.

Daasebre Dr Diawuo recommended that the committee must not rush in the implementation of the Act but rather ensure that all eligible Ghanaian voters abroad would register with Ghana Embassies and High Commissions for them to participate in any general election.

He said ROPAA is laudable and needed to be implemented to consolidate the gains of Ghana’s democracy.

Daasebre Dr Diawuo, who is a specialist surgeon at the Sunyani Regional Hospital, said the nationwide consultation on the ROPAA was very necessary and urged Ghanaians to participate and share ideas that could make its implementation successful.

Dr Eric Bossman Asare, a Deputy Chairperson of the EC and the Chairman of the Committee, said though the ROPAA is confronted with several challenges which has delayed its implementation process, the engagements would bring out recommendations that would facilitate its successful implementation.

He said similar engagements had already been held in the Western, Central, Eastern, Volta and Ashanti Regions, saying outcomes and recommendations so far had been impressive.

Dr Benjamin Kumbour, a former Minister of Defense and the National Democratic Congress representative on the Committee took the participants through processes in the implementation of the ROPAA.