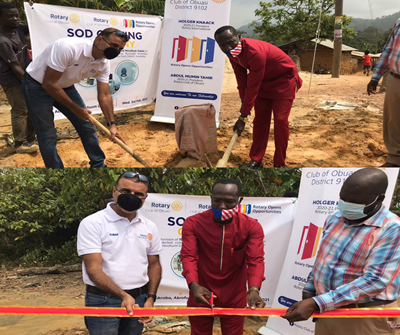 Twenty communities in the Obuasi Municipal, Obuasi East and Adansi Akrofuom Districts are to benefit from water and sanitation facilities.

The facilities, which are being provided by the Rotary Club of Obuasi, will involve the construction of 60 household micro-flush toilets and 19 boreholes.

The move is part of efforts to help improve the water and hygiene conditions of the people in the beneficiary communities.

Mr Sarwan Kumar, President of the Obuasi Rotary Club, announced this at a ceremony to cut the sod for the commencement of the projects at Adukroba in the Adansi Akrofuom district.

He said the Club had partnered the Rotary Club of Montreal in Canada and some individual donors in the United States of America to provide basic social amenities to improve the living conditions of people in deprived communities in the three districts.

Mr Kumar said plans were advanced to build a neo-natal intensive care unit at the Obuasi government hospital to deal with neo-natal deaths, which were increasing in the municipality.

He said members of Rotary Club of Obuasi were committed to helping the less privileged in the society, hence the provision of the boreholes and toilet facilities to the communities.

Mr Jonas Maurice Woode, District Chief Executive for Adansi Akrofuom, praised the Club for partnering with the government to provide basic amenities to the people.

He said the projects would go a long way to reduce waterborne diseases and improve the general health and living conditions of the people in the beneficiary communities.

Mr Woode appealed to the communities to help maintain the facilities once they were completed to help prolong their lifespan.

Mr Antwi Boasiako, who represented the Odikro of Adukroba, thanked the Club for coming to the aid of the people in the beneficiary communities.

Rotary Club International is an international service organization formed in 1905 to bring together business and professional leaders to contribute to provide humanitarian services and to advance goodwill and peace around the world.

It is a non-political and non-religious organization open to all.

There are over 35,000 member clubs worldwide, with a membership of 1.2 million individuals, known as Rotarians.

The Rotary Club of Obuasi was established in June, 2019 and has since been supporting individuals and communities in and around Obuasi. 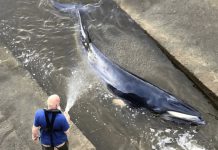