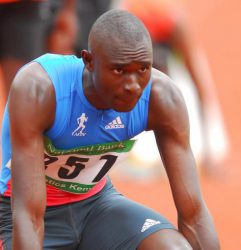 Kenya?s David Rudisha competes in the heats of the men?s 800m athletics event at Hampden Park during the 2014 Commonwealth Games in Glasgow

This will be Rudisha?s fourth appearance at the meet, having run there in 2007, 2010 and 2011. He will face stiff opposition from world champion Mohammed Aman of Ethiopia, the man he intends to reclaim his world title from in Beijing in August.

It will be the last race for Rudisha before the World Championships.

?Yes, I will be running in Lausanne,? said Rudisha in Iten yesterday.

Speaking earlier, Rudisha had hinted he intends to compete in one more race in the Diamond League circuit before heading to the World Championships in Beijing.

He will however skip the other meets ? Monaco (July 17), London (July 24-25) and Stockholm (July 30) as he focuses on his training for the premier track and field competition in Beijing in August. This means he will forfeit the chance to hunt down the IAAF Diamond League trophy.

Rudisha, who returned to action in New York early this month and won in his specialty, his third race of the season in the two-lap race, said he plans to compete in Laussane on July 9 and head straight home for the national trials (July 31) to select the team to the World Championships in Beijing in August.

?I am happy to be back in Iten, my training ground since 2005. Beautiful place with wonderful scenery,? Rudisha tweeted on Monday as he resumed training under coach Colm O?Connell after returning from New York.

Rudisha started his season in Australia early in March, running two 800m races ? Sydney Track Classic in 1:45.01 on March 14 and Melbourne Classic in 1:44.94. However, his progress was halted in Ostrava in May, when he pulled out of a 600m race at the Golden Spike meeting in the Czech Republic city holding onto his thigh.

?I was cautious in New York, especially after injuring my thigh muscles in Ostrava. I started easier and I didn?t push too hard in the end,? said the Olympic champion. ?Now it?s time to return to training.?

Rudisha said he wants to compete in one more race before focusing on the Kenyan trials for the World Championships, which are set for July 31.

?I will run one more race. I hope to get a better field of opponents to continue my tests on the endurance and speed of my body,? he said.

By Chris Musumba, The Standard