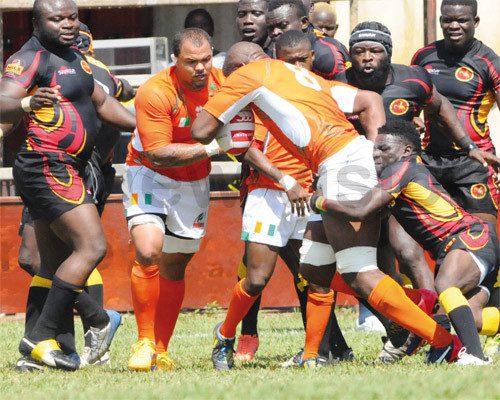 The players celebrate after topping the standings on home soil and ultimately earning promotion to Tier 1A. Photo by Mpalanyi Ssentongo

In a game that coincided with the fifth anniversary of the July 11 terrorist bombings at Kyadondo, the Cranes paid homage to the victims with a relentless performance that included nine tries and eight conversions.

A delegation led by all six captains of the participating teams laid a wreath at the Kyadondo memorial of the victims of the attack before the start of the tournament?s final game, which required Uganda to win by any margin to return to tier 1A.

Madagascar had won their earlier encounter with Mauritius 33-24, taking a three-point lead in the standings ahead of Uganda. But buoyed on by a capacity crowd, the Cranes wasted little time in regain control of their destiny, with Okorach breaking the deadlock with a fifth-minute try that was converted by Ivan Makmot for the first of five conversions.

The floodgates opened. The Cranes played downhill from then, with Ronald Musajja, Justin Kimono, Lawrence Sebuliba and David Kiwalabye all getting a try. James Ijongant made to conversions, the last coming in the 74th minute with party already underway.

?We would like to thank everyone for supporting us,? Cranes captain Brian Odongo said postmatch. ?We are back where we belong?.

By Charles Mutebi, The New Vision