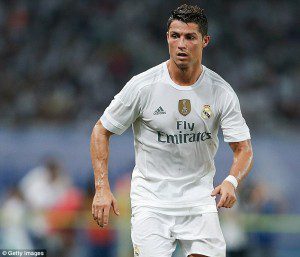 Cristiano Ronaldo will have to beat off competition from Barcelona duo Lionel Messi and Luis Suarez if he is to retain his UEFA Best Player in Europe Award.

La Liga trio Ronaldo, Messi and Suarez are in the running to win the award after making the final cut.

Suarez scored in Barcelona?s 3-1 win over Juventus in this year?s Champions League final and Messi played a major role in his side?s triumph, while Ronaldo scored 10 goals during the course of Europe?s top-tier competition.

Journalists from UEFA?s 54 member associations provided a list of their five best-ranked players, with the first receiving five points, the second four and so on, according to UEFA?s official website.

A jury will have the final say on whether Ronaldo, Messi or Suarez takes home the prestigious award during the Champions League group stage draw in Monaco on Thursday 27 August.

Barcelona forward Messi was the first player to win the UEFA Best Player in Europe Award due to his fine performances during his side?s 2010-11 Champions League triumph.

His team-mate Andres Iniesta, Bayern Munich winger Franck Ribery and Portugal captain Ronaldo have followed Messi in winning the trophy since its introduction.

The award was created in 2011 after the Ballon d?Or, which recognised the best players in Europe, was merged with the FIFA World Player of the Year Award.