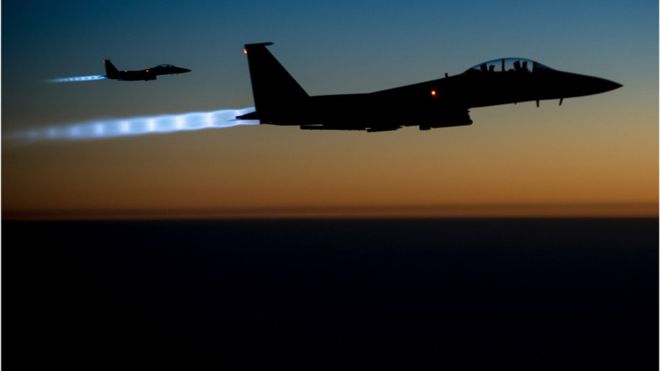 Mr Putin spoke after meeting Barack Obama on the sidelines of the UN General Assembly (UNGA).

But the meeting, and the leaders? speeches at the UNGA, also highlighted splits about how to end the Syrian war.

Russia said it would be an ?enormous mistake? not to work with Syria?s President Bashar al-Assad to tackle IS.

On Monday, the US and France again insisted that President Assad must go. But in response, Mr Putin said: ?They aren?t citizens of Syria and so should not be involved in choosing the leadership of another country.?

Russia would conduct air strikes only if they were approved by the United Nations, he said, while also ruling out Russian troops taking part in a ground operation in Syria.

The two leaders met for 90 minutes on the sidelines of the UNGA in talks that Mr Putin called ?very constructive, business-like and frank?.

It was their first face-to-face meeting in almost a year, with the Ukraine war also on the agenda.

A senior US government official said neither president was ?seeking to score points? in the talks. Both sides agreed to open lines of communication to avoid accidental military conflict in the region, the official added.

In his speech to the UNGA, Mr Obama said compromise among powers would be essential to ending the Syrian conflict, which has claimed more than 200,000 lives and forced four million people to flee abroad.

?The US is prepared to work with any nation, including Russia and Iran, to resolve the conflict,? he said.

?But we must recognise that there cannot be, after so much bloodshed, so much carnage, a return to the pre-war status quo.?

But Mr Putin said it was an ?enormous mistake to refuse to co-operate with the Syrian government and its armed forces who are valiantly fighting terrorism face-to-face?.

He also called for the creation of a ?broad anti-terror coalition? to fight IS, comparing it to the international forces that fought against Nazi Germany in World War Two.

The US and Russian leaders have long differed on Syria: the US opposes President Assad remaining in power, while Russia has been a staunch ally of the regime in Damascus and has recently stepped up military support.

Some Western leaders have recently softened their stance towards the Syrian president, conceding that he might be able to stay in power during a political transition.

UK Prime Minister David Cameron is expected to reflect that in talks this week.

The threat of IS extremists and the flow of Syrian refugees to Europe has added urgency to the search for a deal to end the civil war.

The UK-based Syrian Observatory for Human Rights said that regime aircraft fired missiles at a market in the eastern town of Mayadeen on Monday, killing at least 23 people, including eight children.

A US-led coalition has been carrying out air strikes against IS in Syria and Iraq for more than a year.

The UK announced this month it had carried out a drone strike against two British citizens in Syria, but has yet to fly manned operations in Syrian airspace.

Over the weekend, France confirmed its first air strikes against IS targets. A number of other countries, including Australia, Canada and Jordan, have also conducted bombing missions.