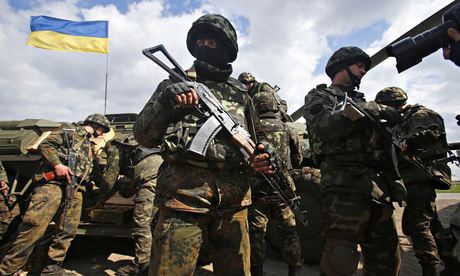 The Ukrainian government confirmed Monday that Russian troops were withdrawing from areas close to the border, but cautioned that Russia continues to allow fighters to cross into Ukraine. “The military units who were stationed in camps along the border are withdrawing and dismantling,” National Security Council spokesman Andriy Lysenko said in Kiev, according to local media reports.

The Kremlin said over the weekend that President Vladimir Putin ordered more than 17,000 Russian troops to pull back from the border with Ukraine where they had been participating in manoeuvres.

It was unclear how many Russian troops remain in the region close to eastern Ukraine, where bloody skirmishes between pro-Russian separatists and Ukrainian government troops continued despite a ceasefire.

Lysenko said that one soldier and one civilian were killed in the fighting during the past 24 hours.

The Security Council spokesman warned that Russia continues to train and send fighters to Ukraine through the border, which Kiev effectively has no control over.

President Petro Poroshenko fired both his defence minister and the head of the border guard, both of whom were widely accused of being ineffective.

On Monday, Poroshenko proposed national guard commander Stepan Poltorak as new defence minister, his office said. The Ukrainian parliament is expected to vote on the appointment on Tuesday.

Poroshenko recently also replaced the head of the border guard service and the governor of the rebel-dominated Donetsk region.

The Ukrainian president is expected to meet Putin for talks on the sidelines of an European Asian summit later this week in Milan.

The Organization for Security and Co-operation in Europe (OSCE) said Monday that it will receive another two drones to observe the ceasefire in eastern Ukraine.

The Austrian-made unarmed aerial vehicles will arrive on Tuesday, bringing the total number of drones to four, the organization said in Kiev. It added that it was too early to say exactly when the first monitoring flight will be.

The east Ukrainian separatists have said that they welcome drones monitoring the ceasefire. However, Andrei Purgin, a senior Donetsk rebel leader, warned that it was unclear how fighters on the ground would distinguish OSCE drones from vehicles used by the warring sides.

“It is technically difficult to guarantee the drones’ security,” he told Interfax.

The OSCE’s chief monitor in Ukraine, Ertugrul Apakan said that all the organization’s 57 member states would have to agree to change the observer mission’s mandate if military personnel is to reinforce it.

The mandate currently stipulates that the observers are civilian and unarmed.

France and Germany have offered to send drones together with soldiers for protection to eastern Ukraine.

Diplomats in Vienna suggested that the offer might be difficult to realize. “One has take into account the perception it would create in Eastern Ukraine and Russia if two NATO countries provide drones,” one diplomat said.
GNA