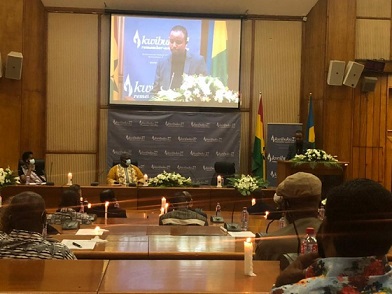 The Rwandan High Commission in Ghana has commemorated the 27th anniversary of the 1994 genocide against the Tutsis in Rwanda.

The event, on the theme: “Remember, Unite, Renew,” was in collaboration with the Rwanda Community in Ghana, Benin, the Ivory Coast, Liberia and Sierra Leone.

It was to honour the lives of the over a million people and to accord them the dignity they were stripped of in the manner they were killed.

Dr Aisa Kirabo Kacyira, the Rwandan High Commissioner to Ghana, in her address, called on the international community to assist the country to bring the masterminds of the 1994 Rwandan genocide to book.

She said it was unfortunate that there were still many suspected masterminds and perpetrators of the incident still enjoying protection from some powerful world bodies.

She said, “sadly, 27 years after the 1994 genocide against the Tutsi, there are still many suspected masterminds and perpetrators who continue to enjoy protection from some government and powerful institutions of our world.”

Dr Kacyira, however, told leaders and members of the international community, that Rwanda would continue to count on them to stand up for justice in honour of the memory of the innocent lives lost and to bring the planners and perpetrators of the genocide to book.

Also, they must unite in the fight against the denial, revision, and trivialization of the genocide against the Tutsi.

“For the survivors of the genocide, knowing that the people who planned and executed their annihilation continue to move freely and in some instances are able to cause them harm, through their messages that deny, trivialize, or revise the 1994 genocide against the Tutsi is a nightmare,” she said.

“Nevertheless, the fight against genocide and its ideology continues through upholding the truth of what happened.”

“Saluting the undying spirit, I wish to express our eternal gratitude to the survivors of the genocide who by choosing to forgive instead of revenge stand tall as our heroes. You have given us a chance as a country to rebuild on these principles of unity and reconciliation.”

General Henry Kwame Anyidoho (Rtd), Deputy Force Commander of the United Nations Assistance Mission for Rwanda during the months of the 1994 Rwanda genocide, in an interview with GNA, said it was the hate speech on the radio that led to the outbreak of the genocide and appealed to Ghanaians to desist from making hate speech.